By the Art Gallery of NSW 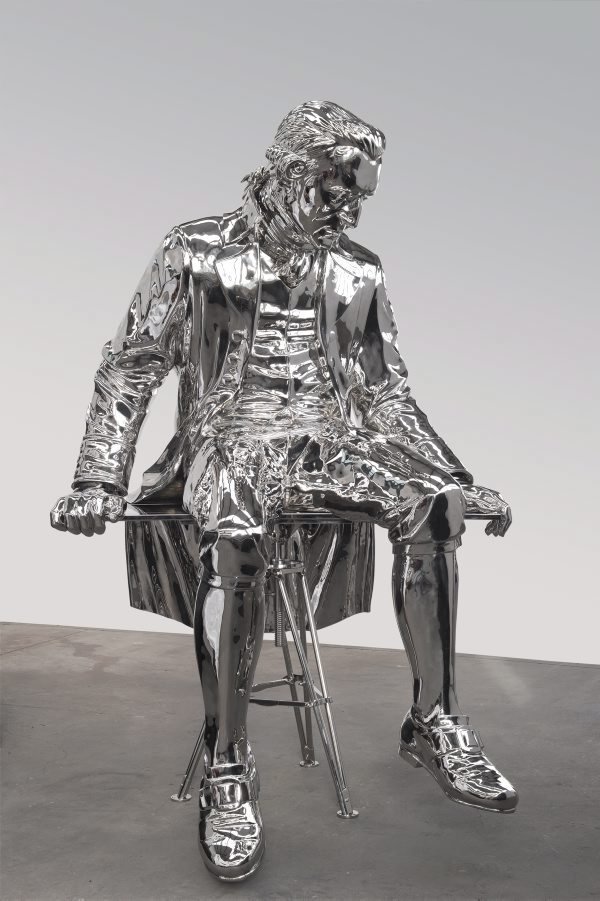 A striking new sculptural presence has arrived at the Art Gallery of NSW.

Larger than life and created from highly polished steel, it sits in the Australian galleries, in front of the Gallery’s ground floor windows with their view of Sydney harbour. The figure, with flowing topcoat and ponytail, is the British navigator Captain James Cook.

But this is not Cook as he is seen in the many historical monuments that bear his name – nor in the famous 1776 portrait painting by Nathaniel Dance which is one inspiration for this sculpture. Resting without his feet touching ground on a sculptor’s working table, this Cook seems to be reflecting on his legacy in the contemporary world. At the same time, his dazzling surface collects the reflection of everything around it – including the harbour past which Cook sailed in 1770 and the visitors in the room. Despite the sculpture’s considerable height and weight, this mirror-like surface lends it a slippery and elusive presence; the sculpture changes as the light changes and as viewers move around the room. The result is a monument of a very contemporary kind – not a full stop marking the end of a story but a question mark inviting reflection.

Michael Parekowhai (b1968) is a New Zealand artist of Maori (Ngati Whakarongo) and Pakeha (European) descent. His sculptures, characterised by their sense of polish, balance and play, have been seen in the Sydney Biennale, The Gwangju Biennale, the Andy Warhol Museum, the Venice Biennale (where he represented New Zealand in 2011), and recently in an acclaimed survey exhibition, The Promised Land, at QAGoMA in Brisbane.

Parekowhai's The English Channel 2015 has been acquired for the Art Gallery of NSW collection through the extraordinary generosity of one of the Gallery’s longest-serving patrons, Peter Weiss AO.