How do artists allow us to perceive light - and shade - in an artwork? If the artist isn't restricted to one medium, this task will vary from medium to medium, from paint on canvas to the carving of marble.

Sculptors can play directly with light by manipulating the surface onto which light will naturally fall for intentional and particular effects to the eye. Their forms catch light in predictable ways: the same way light falls on the very objects they choose to represent.

Painters, however, have consistently faced the challenge of how to let the eye recognise shaded and light-saturated objects and spaces whilst working on a flat surface. Plays with colour - different tones and shades - have defined this exploration through painting's history.

Plays of light through different colourations were central to Impressionist painting. The subsequent modern pursuit to represent light in its purest form - light as light rather than light as colour - pushed the concept of painting (of pigmented medium on canvas or board) to its absolute limits. The experimentation with colour in painting to convey lighting effects set the foundations for the integration of electric light into art and the expansion of painting into spaces suffused with light.

The following exploration of some of the Gallery's collection works will consider the extent of the challenge that painters face in comparison to their sculptor counterparts. And it will take a closer look at how a selection of the artworks housed within the Gallery have used colour to let the eye recognise lit and shaded areas.

Ilana Heller is an Art Theory student at UNSW Art + Design, currently completing an Honours thesis on the use of light as material for recent memorial designs. She has been interning with the digital engagement team at the Art Gallery of New South Wales, so Art Sets is her second nature. 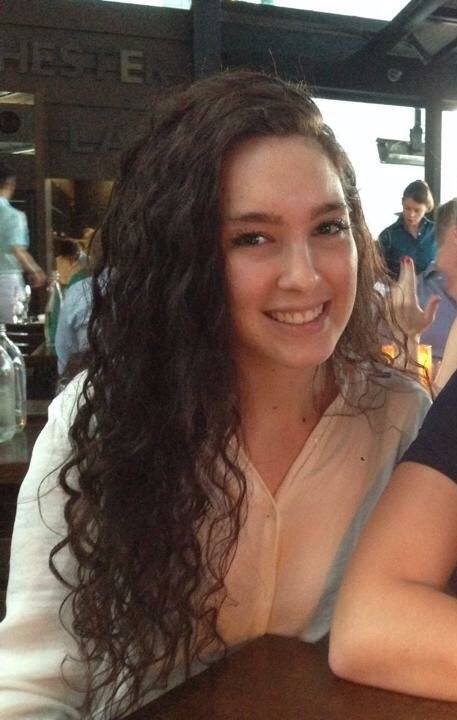 Notice the way you perceive the creasing of the body's folds, and the curves and bumps of the figure's muscles in John Gibson's Hunter and dog. Or the way you are compelled to catch the unravelling orange that teeters on the edge of Ricky Swallow's table in Killing Time.

The materials from which these two sculptures have been carved are relatively homogenous in colour. That is, they are neutral with no variations in colour. Aside from mimicking exact proportions of the real-life objects, the sculptor is highly aware of the extent to which light's interaction with surfaces makes us believe forms to be realistic and believable. Sculptors working with raw materials of wood and marble may sculpt an entire assemblage from one solid piece (as Gibson and Swallow have). These artists distinguish different objects within their compositions from one another, without the use of colour. For sculptors, light and shadow reveal meaning. Without nuances of light and shade, drapery, creases and meeting points of different objects would not be perceivable. 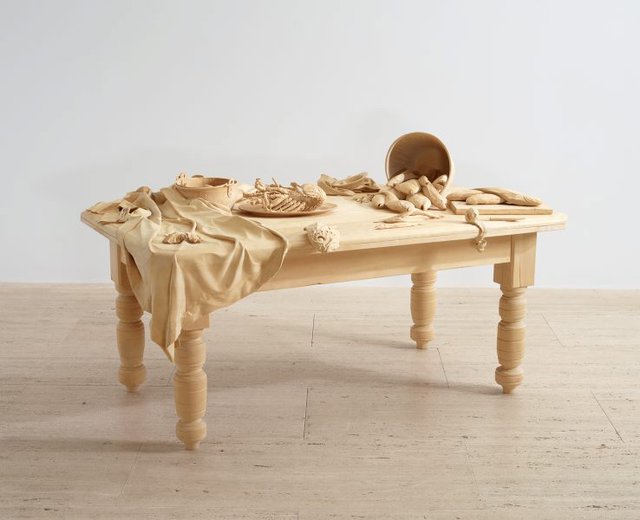 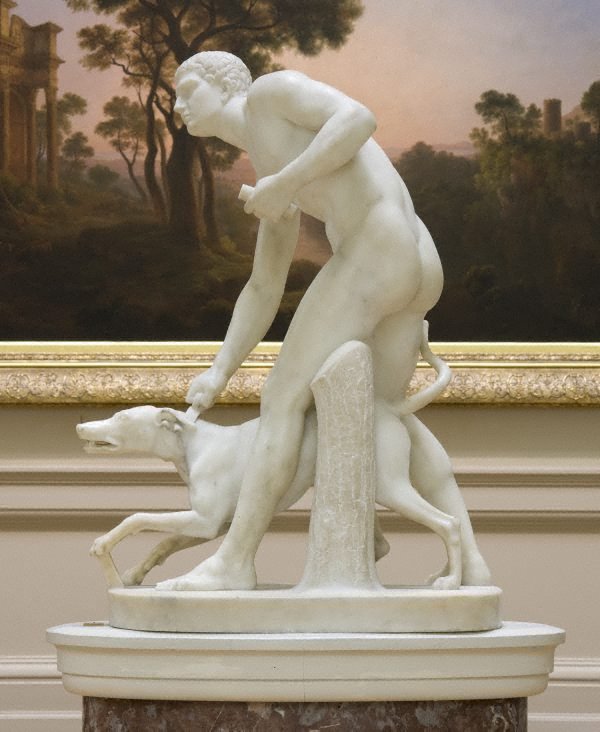 If either of these sculptures was overly saturated in light, we would not recognise the intricate details of each flexed muscle and shucked oyster. We can see that the sculptor's materials are as much marble or timber as they are light. Sculptors may have no control over lighting conditions, as these are often applied after the art-making process. However, with considerations of the optimum viewing conditions of the sculpture, light is cast upon the sculptures from the Gallery's ceiling in an intentional way, letting us perceive the realistically highlighted and shadowed form.

Margaret Preston's Implement blue is painted in a restricted palette, to which the title of the work directly speaks.

The word 'implement' implies the reduction of silverware and crockery to their mere functions, so that they are only objects, removed from their domestic setting, given as much attention as the shadows they cast.

Preston has isolated darkness and lightness in this image, with very few intermediary shades. This tells us of the intensity of the glow of the light source that is out of view, and provides a sense of depth to the still life. We understand the closeness of the objects by the way the deep blue shadows butt up against the adjacent objects. 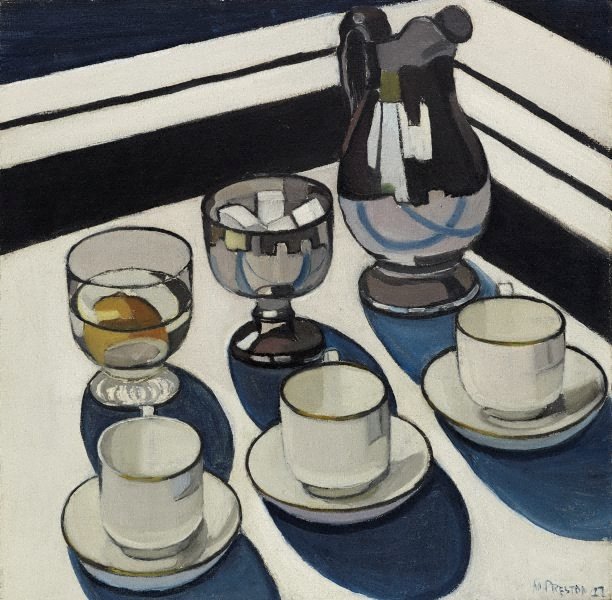 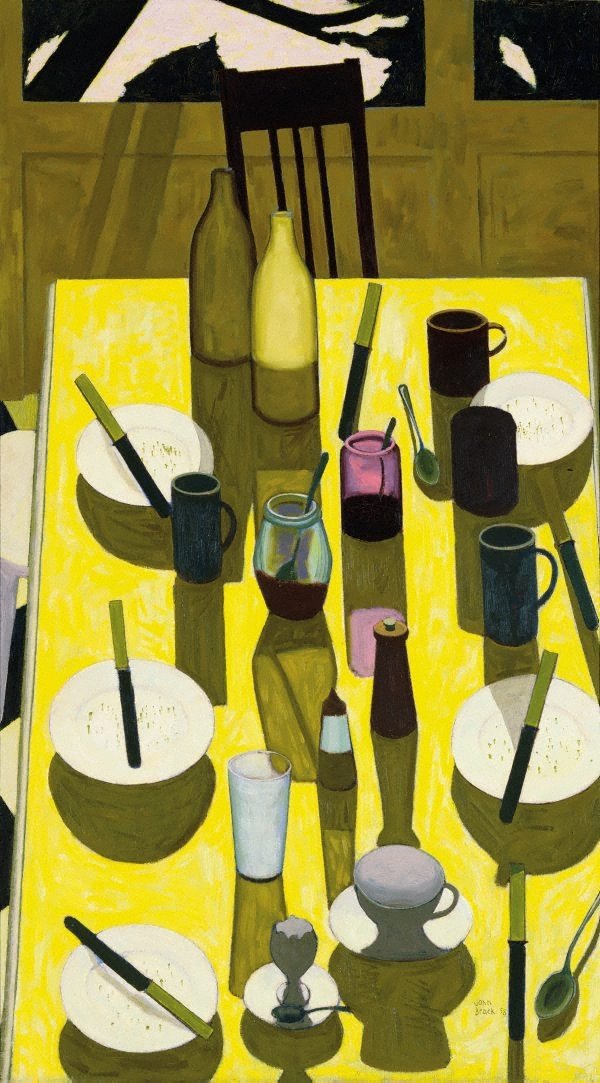 Similarly to Preston, John Brack, in The breakfast table, gives as much attention to shadows cast across the table as he does the objects that sit upon the table. As the morning light streams onto the bright yellow surface, slightly yellow, muddied silhouettes leak away from the light, overlapping one another, casting other objects in shade. Opaque crockery casts the darkest shadows, whilst the translucent jam jar and the half-empty pepper shaker come a closer shade to the yellow of the table.

If yellow-ness is the champion of this painting, the shadows do not command the position that Preston's striking blue shadows do, but they are darkened versions of the primary colour. We struggle to decipher the exact colour of the shadows because the clever mixing of paints lets us believe them to be the absence of light upon a yellow surface, and not things that we can pick up and use, or drink our Earl Grey out of.

A shadow is the absence of light. It is the result of a blockage to the light source that takes the form of the object that stands in the light's path, extending from its base. We understand their status as voids of light, and not as domestic utensils, because of their integration into the colourations of the table. The shadows' subtlety via muted colour provides depth to the breakfast table setting. 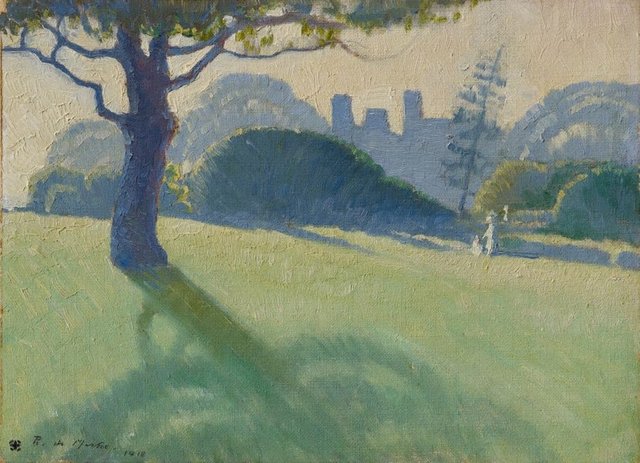 In his late career, artist Roy de Maistre was influenced by post-impressionistic experimentation with light through tones and colour. His 1918 work, Botanical Gardens, Sydney, maintains a cool palette of greens and blues. The shadow of the tree in the foreground plays with bluer hues of green than the grass, setting a distinctly tree-shaped visual mass off against a yellow-tinged surface.

De Maistre has, very similarly to Brack, considered the absence of light as a darkened tone of the surface on which the shadow would actually lay so that we do not read shadow as a black hole under which nothing can visibly exist. The artist has textured the shadow in the same way that he has the rest of the foliage in the painting. The dappled nature of the shadow of the tree reminds us that it is caught by an uneven surface. This technique also makes the eye aware of the difference between the real tree and the shadow it has cast: the former solid and opaque, the latter a subtle variation of tonalities.

Whilst the previous artists have stuck to muted colour palettes to depict light and shade, Roland Wakelin's The outcrop, in a particularly Impressionist style, is a series of different coloured brushstrokes placed next to one another which, together, give a depth of colour and texture.

The strokes of red that occur in the sun-saturated grass at the foreground of the painting are almost pastel-like in hue, sitting adjacent to spurts of yellow and baby blue. We recognise the shadow of the tree sitting on the left of the painting in the patches where the reds are deeper, contrasted more strongly against darker aquamarine blues, amongst only a few scattered strokes of yellow. The tree itself is painted in a blackened-blue colour, distinct from what we understand as its shadow that stretches from its base.

The painterly gestures that Wakelin has used give the grass a very grass-like quality, which, in turn, means that the shadows cast upon it, painted in the same gesture, are understood as sitting atop the grass, not a natural part of it, nor physical objects either. 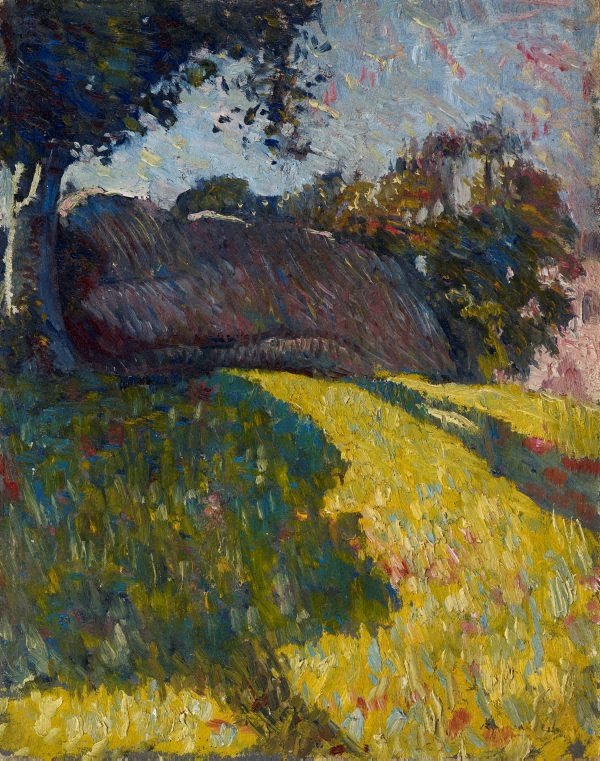