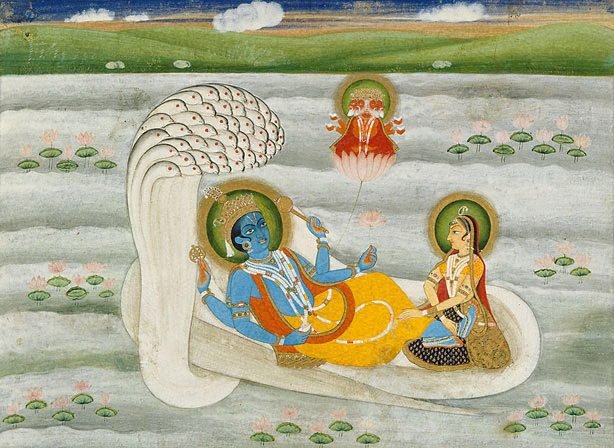 Vishnu reclining on the serpent Shesha with Lakshmi in attendance

Other titles:
Vishnu and Laxmi resting on serpent god Sheshnag
Location
Not on display
Further information

This scene from the sacred Bhagavata Purana text illustrates the love of Vishnu and his consort Lakshmi, the goddess of wealth and prosperity, as they float atop the cosmic waters. The blue-skinned Hindu god Vishnu is shown reclining on the giant serpent Ananta Shesha (everlasting serpent). In Vishnu’s four hands he holds his attributes – a discus, mace, lotus blossom and conch shell. Vishnu’s feet rest in Lakshmi’s lap. Their union represents the creation of the world symbolised by the birth of Brahma, the four-headed god of creation. Brahma can be seen emerging from the lotus flower growing from Vishnu’s navel.