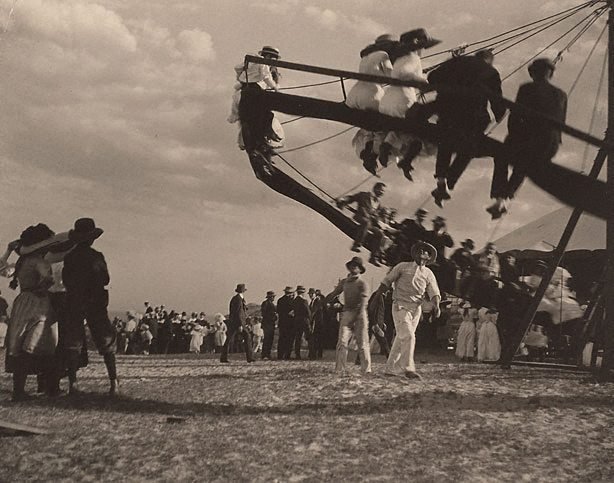 Razzle Dazzle won Cazneaux international acclaim and positioned him at the forefront of pictorialist practice. It was exhibited at the London Salon of Photography in 1911 and appeared on the cover of the international journal, The Photographic Monthly in October of the same year. H. Snowden Ward, Fellow of the Royal Photographic Society, praised Cazneaux for his bold creativity in choosing and framing the scene. He remarked, ‘I doubt there are six men known in the photographic world who are capable of “seeing” and appreciating such an arrangement’ 1. As Isobel Crombie argues, Razzle Dazzle’s uniqueness lies in its dynamism and unusual subject matter. The right side of the frame splices the ride resulting in the wheel only being captured in part amidst the amusement’s rotation 2. The blurred momentum of its lofty patrons and the lunging attitude of the ride’s manual operators contrast to the still, clear silhouettes of onlookers.
Harold Cazneaux was born in Wellington, New Zealand in 1878. His parents, Pierce Mott Cazneau and Emma Florence (née Bentley) worked in commercial studios in New Zealand before returning to settle permanently in Adelaide during the early 1890s. At the age of 18 Cazneaux went to work alongside his father at Hammer & Co studio as a retoucher. He moved to Sydney in 1904 to join the larger portrait firm, Freeman’s quickly ascending to the position of ‘chief operator’ (as camera portraitists were known). Studio work was highly formulaic, with little scope for creativity. Cazneaux used his time walking to and from work to experiment with pictorialist aesthetics 3. The Photographic Society of New South Wales organised an exhibition of Cazneaux’s photographs in 1909, the first such solo exhibition of its kind in Australia. In 1916 he and fellow pictorialist photographer, Cecil Bostock founded the Sydney Camera Circle. The group was particularly interested in the how pictorialism could be adapted to and extended within an Australian context. The mechanised, standardised and frenetic pace of Freeman’s increasingly took its toll on Cazneaux’s creativity and health, and he resigned in 1917. He moved with his wife and daughters to the Sydney suburb of Roseville, and in 1920 he was employed as the official photographer for The Home magazine. This new position let him work in a varied indoor and outdoor environments. In 1938 Cazneaux was awarded an Honorary Fellow of the Royal Photographic Society of London. He continued to work until his death in 1953.
1. Ward, HS 1911, The London Salon, ‘The Photographic Monthly’ October Vol. XVIII No.214 p 288
2. Crombie I 2008, ‘The Razzle Dazzle 1910’, in ‘Harold Cazneaux: Artist in Photography’, Art Gallery of New South Wales, Sydney p 71
3. Newton G 1988, ‘Shades of Light: Photography and Australia 1839-1988’, Australian National Gallery, Canberra p 85