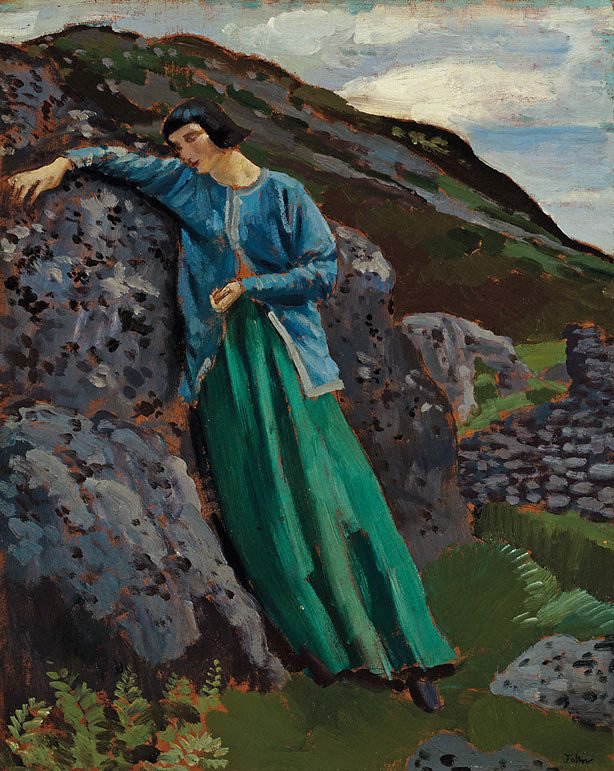 Other titles:
Reverie, The Tired Climber, Dorelia in Cornwall
Location
Not on display
Further information

As the draftsman, colourist and portrait painter of his generation, only Augustus John’s reputation as the archetypal bohemian rivalled his artistic talent. The artist’s status began to grow during his years attending the Slade School of Fine Art in London, winning the prestigious Slade Prize in 1898 with ‘Moses and the Brazen Serpent’. Studying under the drawing masters Henry Tonks and Frederick Brown, even before his graduation John was recognised as the most brilliant draftsman of his generation. By the early 1900s John had become the most famous artist in Britain with his brilliant figure drawing compared to that of Michelangelo, Gauguin and Matisse, and in 1903 at age 25 John became the leading British artist of the day.

The legend of his character, however, had its origins in a walking holiday John took in Pembrokeshire in 1897 when two significant events occurred that would shape his life forever. The first was the artist’s introduction to a group of Irish gypsies, instigating John’s lifelong fascination with gypsy life. The second event was a serious head injury that John suffered after diving onto a rock. Curiously this experience led to a dramatic change in John’s personality and the artist returned to the Slade as a restless scruffy bohemian, a heavy drinker and with a sexual appetite that created torment for the women he loved. Artistically John became, thereafter, a much more adventurous, spontaneous and assured artist, which led to the myth “he had dived into the sea, hit his head on a rock and emerged a genius”. His subjects most commonly featured coastal landscapes, gypsies, his family and fellow artists and he is considered by many as the most talented artist of his generation. (EF)