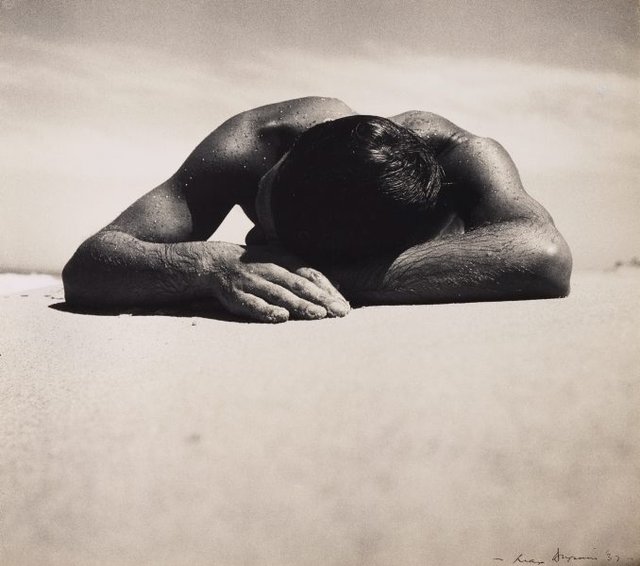 When asked by Helen Ennis in 1991 for an explanation of the fame of the ‘Sunbaker’, Dupain responded:
I’m a bit worried about it. I think it’s taken on too much … It was a simple affair. We were camping down the south coast and one of my friends leapt out of the surf and slammed down onto the beach to have a sunbake … We made the image and it’s been around, I suppose, as a sort of icon of the Australian way of life.1

Although Dupain took some photographs of his friend as the sunbaker in the 1930s, this image did not appear until his monograph was published in 1948.2 The image he chose was slightly different, a little less monumental due to the positioning of the arms, and with less sand and more sky. The negative was lost and in the 1970s the other version was printed for the first time and, through exhibition and reproduction, became the icon that it is today.

By the late 1940s Dupain had left many of his earlier experiments behind and he wrote:
This little collection is a cross section of that which I consider to be my best work since 1935 … Modern photography must do more than entertain, it must incite thought and by its clear statements of actuality, cultivate a sympathetic understanding of men and women and the life they create and live.3

The ‘Sunbaker’ represents the shifts in Dupain’s practice from private snapshot to public domain, from ardent modernist experimentation to determined recording of actuality and form.4 Within this image is Dupain’s pervasive interest in the individual body as a metaphor for social wellbeing and an exemplar of pure form.