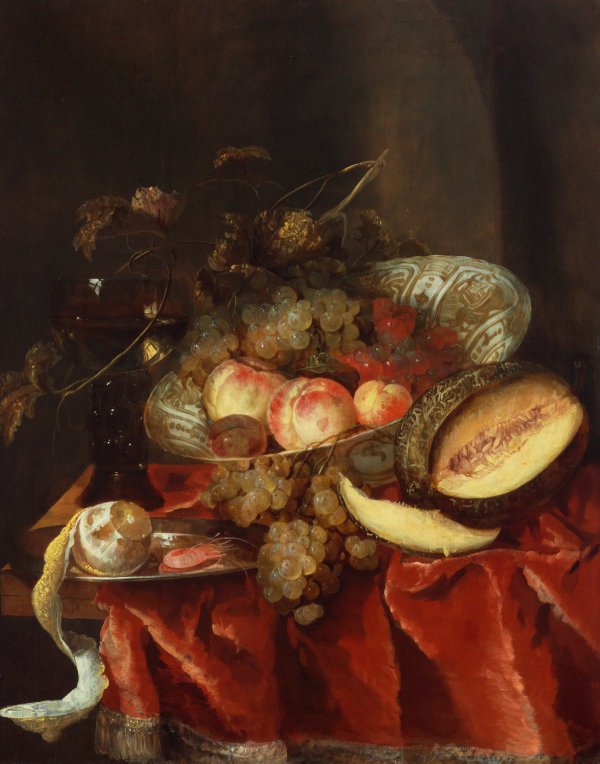 Still life with fruit, a glass and a Chinese Wanli porcelain bowl

Other titles:
Grapes, peaches, a nectarine and a plum in a 'Wanli kraak porselein' bowl with a glass, a melon, a bunch of grapes, and a peeled lemon and a prawn on a pewter plate on a draped table, Still life, fruits, porcelain, glass
Location
Not on display
Further information

The Hague artist Abraham van Beyeren does not appear to have been financially successful in his lifetime but he is now regarded as one of the finest still life painters of the Dutch Golden Age. Archival records show that he was regularly in debt, and his uncommonly broad-ranging repertoire was perhaps the result of a search for a successful formula. He began his career with marine paintings and river views, subsequently turning to fish still lifes, which he depicted in a most lifelike manner. In the 1650s he began producing the type of elaborate still life for which he is best known. Called in Dutch 'pronkstilleven' (still lifes of display or ostentation), these compositions feature tables laden with luxury manufactured items – silverware, Chinese porcelain, rich fabrics, fragile glass – and exotic foodstuffs.
Such paintings represent a shift away from the moralising function of earlier vanitas still lifes (reminders of worldly transience and mortality) towards a more celebratory embrace of earthly pleasures. They also show off the prosperity of the Dutch Republic, its maritime power and the efficiency of its international trade – for all this is implied in the Chinese porcelain bowl and in the fresh lemon, imported from Sicily or Spain, unwinding its peel in the foreground.
The bowl is of a recognisable design dating from the Wanli period (1573 – 1620). Such pieces were imported in large numbers by the Dutch East India Company, and were known as kraak ware after the ships (carracks) that carried them. The original blue and white colouring of the bowl has faded over time because of the fugitive nature of the blue pigment used by Van Beyeren.
When looking at the painting, our eye level coincides with the bulbous middle of the roemer drinking glass behind the lemon. However, Van Beyeren suggests the mobility of multiple viewing points by tilting the porcelain bowl. Thus the bowl assumes a commanding role in the composition, showcasing the rare and exotic peaches, apricot and plum. The cut melon is also cunningly propped up on bunched folds of red velvet to reveal its succulent flesh.
Van Beyeren’s still lifes are distinctive for their loose painting style and soft palette. This may have contributed to his lack of success, since the smoother and more precise a still life was, the more it was appreciated and the more it cost. Today, however, we admire the artist’s fee handling and loose brushwork, which is much in evidence in the boldly painted lemon and red drapery.