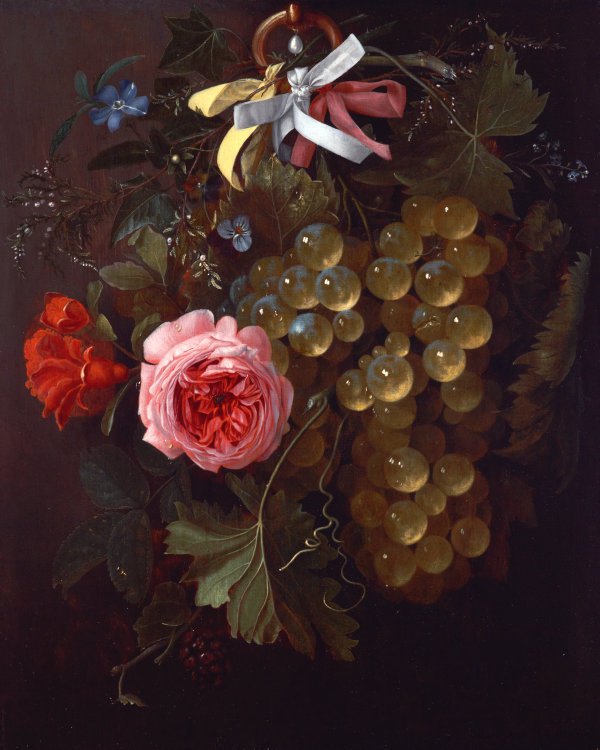 Flowers and grapes hanging from a ring

Other titles:
A rose and other flowers, and a bunch of grapes hanging from a ring
Location
Not on display
Further information

Maria van Oosterwijck was born at Noortdorp, near Delft, the daughter of a Calvinist minister. She was active in Delft, and then in Amsterdam from 1673. She began painting flower still lifes at an early age. Her aunt’s marriage to the widowed father of the famous still life painter Abraham van Beyeren, when Maria was 17 years old, may have been decisive for the development of her precocious artistic talent.
According to the 18th-century biographer of Dutch Golden Age painters, Arnold Houbraken, Van Oosterwijck was a pupil of Jan Davidsz de Heem, and although this is not confirmed, her work certainly displays an affinity with his. De Heem’s influence is evident in her lighting effects, the use of profoundly dark backgrounds, and the sense in her paintings of a convex hemisphere which rounds in pictorial space.
Houbraken described Van Oosterwijck as ‘demure and extraordinarily pious, yet merry and exceptionally industrious’. He noted her oeuvre is quite small, despite her diligence and industry, because she made elaborate paintings and worked in slow, meticulous manner. She is also documented as commissioning an art dealer to market her works in Amsterdam. Although Van Oosterwijck could not become a member of the painters’ guild because of her gender, her work became extremely popular, commanding high prices and awakening the interest of foreign collectors. Her clients included King Louis XIV, Emperor Leopold II and the King of Poland.
Van Oosterwijck was particularly devoted to floral still lifes although she also painted a small number of vanitas still lifes, and tabletops laden with lavish displays – so-called pronk or ostentatious still lifes. While most of her work consists of depictions of bouquets in a vase, she also devised alternative configurations, such as garlands (arrangements of flowers hung from two points) and festoons (arrangements hung from one point). This festoon consists of a bunch of grapes with a few flowers (rose, pomegranate blossom, viola, blue vinca, forget-me-not), some ivy and vine leaves, and a pine cone. It is tied with yellow, white and pink ribbons to a brass ring enclosing a single pendant pearl. The most prominent flower is the pink, multi-petalled Provence rose (rosa provincialis), evidently a favourite of the painter’s since it appears in most of her still lifes. Here it emphatically faces the viewer, inviting us to peer into its very heart.