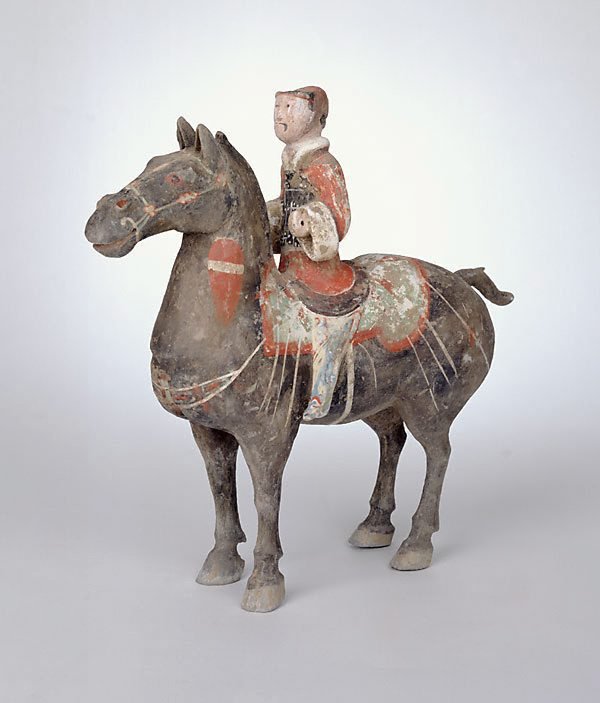 Other titles:
Horse and rider, A painted grey pottery figure of an equestrian
Location
Not on display
Further information

This figure is distinguished by the extraordinary amount of bright, original pigment that remains. The sturdy horse stands foursquare. The soldier on his back wears armour over a short red tunic with a thick, white collar, a black border on the skirt, hair drawn up under a red helmet tied beneath the chin, and hands positioned and drilled to hold reins. Larger but stylistically similar figures, dated to the early Western Han, were unearthed in 1965 at Yangjiawen, near Xianyang, Shaanxi province.

Compare the group of stylistically similar, but larger figures, dated to the early Western Han, unearthed in 1965 at Yangjiawan, near Xianyang, Shaanxi province. Burials containing large numbers of mounted cavalrymen and foot soldiers were found in the vicinity of the tombs of the first Han emperor, Gaozu, and the emperor Jingdi at Yangjiawan. See 'Wenwu', 1966, no.3, pl.1-4 and 'Wenwu', 1977, no.10, p.17. See, also, The Quest for Eternity, Los Angeles County Museum of Art, 1987, Catalogue, p. 105. fig. 15.'