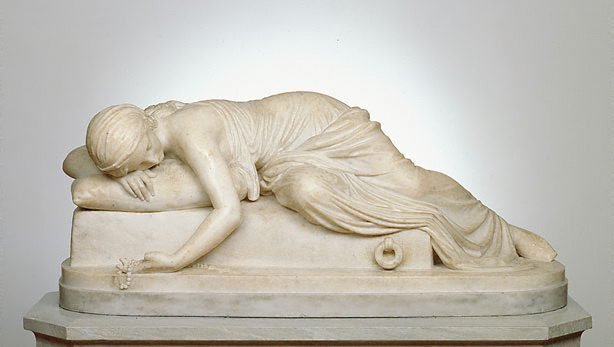 Neoclassicism produced a significant number of women sculptors, many of whom were American by birth. Among them, Harriet Hosmer enjoyed perhaps the greatest celebrity, entertaining dignitaries and connoisseurs in her Roman atelier with the practical aplomb of a 'grand maître'. A pupil of John Gibson, her work was widely collected, often on the basis of an interest in her gender as much as her considerable professional merits. Hosmer adapted continental neoclassicism to a personal vision steeped into the classical philosophies of a democratic nation. Capable of producing work on a large scale and to specific order, she was especially proficient in the execution of public monuments. Her smaller works were frequently issued in multiples to accommodate demand. Among her most popular were 'Beatrice Cenci', which exists in several versions.

Signed back of base, "HARRIET HOSMER...". Not dated.