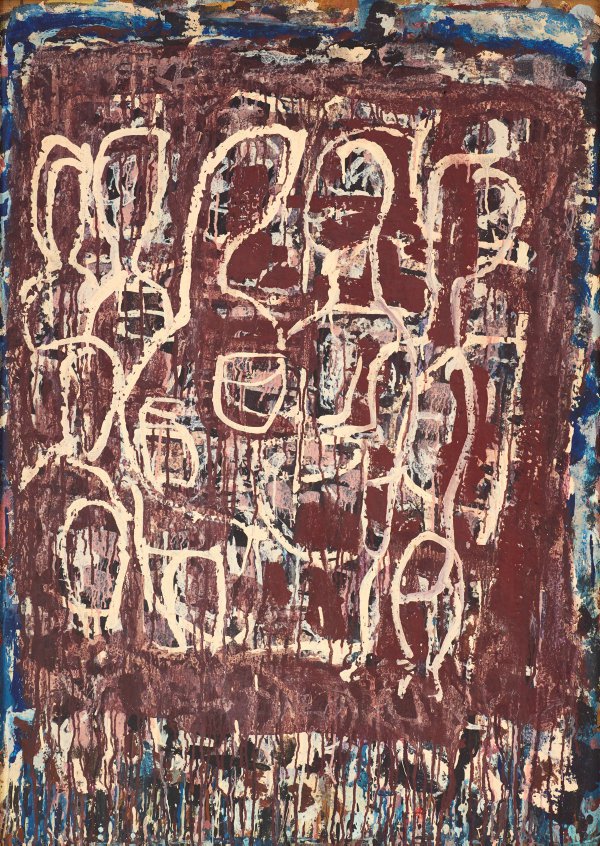 Ian Fairweather drew inspiration from southeast Asian cultures, cubism, abstraction and Aboriginal art, to produce layered calligraphic compositions, often verging on the abstract. In 1965 he observed '"[I used to]... carry around a small sketchbook and make studies from various things I saw, but in time I got interested only in a few subjects and I didn't want to go around looking for any more subjects. The problem was to do the one subject, and so it practically boiled down to that. By one subject I mean... people.'

Following schooling in Britain and Switzerland, Fairweather served in the First World War where he was captured and interned in a German POW camp. He passed the time learning to draw. Returning to the Hague after the armistice in 1918, he took up a four-year course of study at the Slade School in London under Henry Tonks, while spending his evenings learning Japanese and Chinese at the School of Oriental Studies at the University of London, which led him to question the primacy of the western visual tradition. During the 1930s and 40s Fairweather lived a nomadic existence, travelling extensively in Canada, China, Indonesia and Australia. From 1949 he also regularly exhibited at Macquarie Galleries in Sydney, where his work impacted local artists, including Tony Tuckson, whose own abstract painting has echoes of Fairweather's calligraphic style.

A turning point in Fairweather’s life and work occurred in 1952 when he undertook a sixteen-day journey by raft from Darwin to Roti, Indonesia, during which he nearly perished. Held by Indonesian authorities for three months, he was deported and returned to Australia, settling on Bribie Island off the coast of Queensland. On Bribie Island Fairweather built a thatched hut and, living as a hermit, continued to paint until his death in 1974, producing some of the most significant works of his idiosyncratic career.

By 1969 Fairweather was at the height of his investigations into pictorial abstraction. 'Composition with figures' is perhaps the finest of these late period works. The painting is an amalgamation of a lifetime of Fairweather's combined experiences and explorations into art. It is also a celebration of the physical act of painting, which sustained Fairweather in his final years of self-imposed isolation. Drips of paint are visible throughout the work, culminating in a curtain of drips at the bottom of the canvas, which have been left unconcealed by the artist. A central group of figures, reduced to their barest forms and painted in simple cream lines, emerge from Fairweather's multi-layered background. Using a limited colour palette in shades of navy, umber and cream, typical of this period, Fairweather's signature layering upon layering of paint offers only hints of a hidden, earthy background.