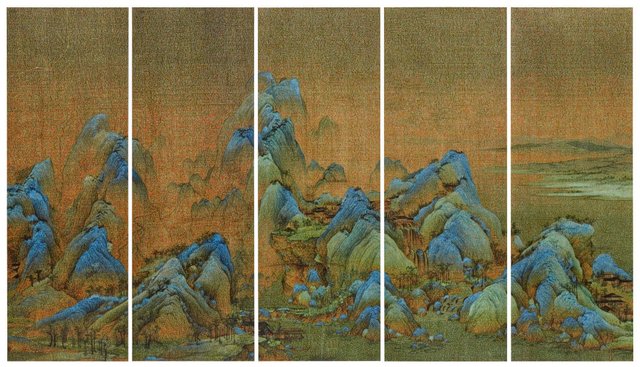 Guo Jian’s intricate photographic collage The Landscape No.1 depicts a serene landscape based on a famous painting of Qian Li Jiang Shan Tu (Landscape of thousands of miles) by Wang Ximeng (1096-1119). On close observation, this image subtly unfolds to reveal a sea of montaged smiling faces belonging to movie and television stars. According to the artist, their notoriously sexy smiles infiltrate all aspects of the environment in contemporary China. Juxtaposing a unique cultural heritage with the malignant side of consumerism, Guo Jian brings into focus the environmental and cultural decay that has begun to take hold of present day China.

Guo Jian is a well-known Chinese Australian artist in Australia based in New South Wales. He first come to Australia in 1992 and established a career that saw his paintings acquired by various institutions including the National Gallery of Australia. He returned to live in China in 2005 but in 2014, after giving an interview to the Financial Times, was deported.