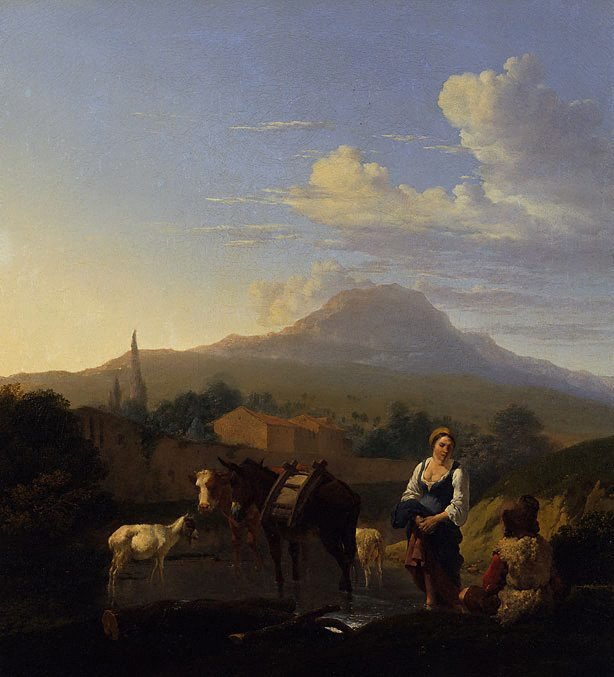 Other titles:
Italianate landscape with shepherd and peasant woman
Location
Not on display
Further information

According to the biographer Arnold Houbraken, Karel Dujardin was a pupil of Nicolaes Berchem, although it has more recently been argued that a distant cousin, Pieter Nason might have been his teacher. For most of his life, Dujardin lived and worked in Amsterdam, with stays in The Hague between 1655–56 and 1658–59. It is probable that he visited Paris and Lyon in 1650–51. He finally travelled to Italy via Tangiers in 1675, after decades painting Italian scenes from his imagination. In Rome, Dujardin became a member of the Dutch artists’ group the 'Bentvueghels' (birds of a feather), which gave him his nickname of 'Bokkebaert' (goatee). Numerous works attest to Dujardin’s productivity in Rome, where he painted his last known work in 1678, before moving to Venice where he died later that year. Besides the Italianate landscapes for which he is best known, Dujardin produced many history paintings, genre scenes, animal pieces and portraits. He was also a prolific draughtsman and etcher.
When he was living in The Hague, Dujardin painted several Italianate landscapes, influenced by Claude Lorrain’s idealised pastoral imagery, which emanate an extraordinary sense of tranquillity. Such works were appreciated and sought after by cosmopolitan Dutch collectors for their associations with rural retreat and the sunshine and warmth of the south. 'A fresh morning' shows a shepherd and shepherdess talking at the edge of a small stream. Their animals – a donkey, cow, goat and sheep – have finished drinking and stand warming themselves in the morning sun, whose light streams almost horizontally from the left. In the middle distance there is a walled villa, and farther back a high mountain, rising into the clouds.
The influence of Nicolaes Berchem is apparent in the figure of the seated shepherd, seen from the back, which appears to be adapted from a black chalk drawing by Berchem in the Albertina, Vienna. There is also a visible alteration (pentimenti) to the hat of the shepherd. What now appears as a black felt hat shows signs of having been originally a red cap.
Although today Dujardin’s star has faded somewhat, in the 19th century he was one of the most popular and collected artists. 'A fresh morning' is extensively documented and has an interesting provenance, which includes an impressive list of 18th– and 19th–century French, Dutch and English collectors. In the late 18th century the painting hung alongside masterpieces by Vermeer and Hals in Amsterdam, and later entered the collection of Alfred de Rothschild. In the early 20th century the painting was at Highclere Castle (location of the TV series ‘Downton Abbey’). It was sold by the Countess of Carnarvon in 1925 to help finance excavations in Egypt – led by her husband, Lord Carnarvon – to unearth Tutankhamun’s tomb.