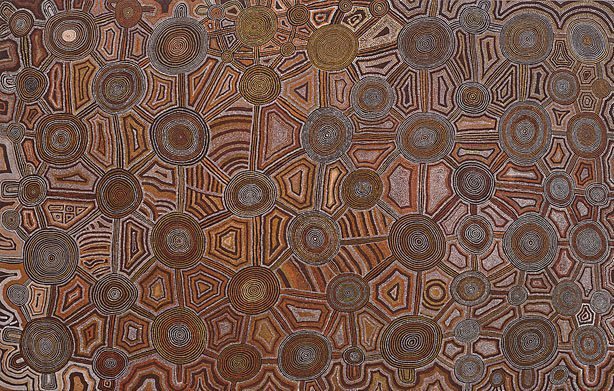 Uta Uta Tjangala was a gardener at Papunya when he became one of the original group of artists who began painting in 1971. Tjangala is regarded as one of the Pintupi 'masters' who began with small-scale paintings on board, and moved on to painting canvases on a vast scale, as in 'Untitled (Jupiter Well to Tjukula)' 1979. It is an indication of his seniority and ability as an artist that Tjangala was commissioned to create a work of this size so early in the history of Papunya Tula painting. Based on the Tingari cycles of ceremonies, the work depicts ancestral activities over a vast area of the Western Desert and may be seen as a longing for home at a time when Tjangala and many other Pintupi leaders were advocating for the establishment of homelands in their traditional country. This dream was realised with the establishment of Walungurru (Kintore) in 1981 and Kiwirrkura in 1983, which service numerous outstations throughout Pintupi country.