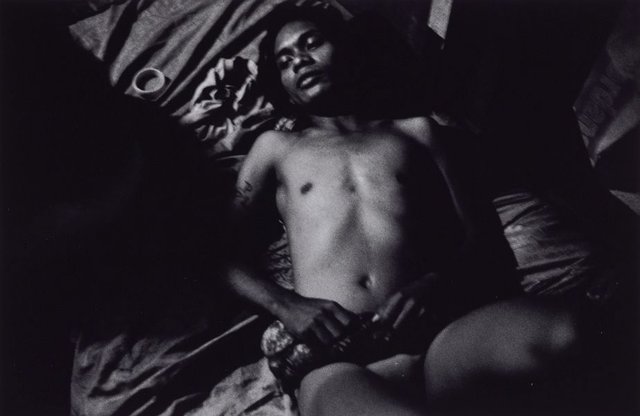 Untitled 8, from the box set Trans/Tender

Billy Maynard’s series ‘Trans/Tender’ is a prime example of the artist’s strong interest in black and white analogue photography and dark room processing. The series was taken in 2010 in the capital of East Timor, Dili, where Maynard spent more than four months immersed in a Catholic community, many of whom were transsexual prostitutes. Printed in 2011, the seventeen photographs included in this series result from that experience and depict some of the people Maynard got to know during his time in the Dili shanty town. The title of the work plays on the fact many of the subjects are transgender. The timbre of ‘Trans/Tender’ combines the idea of ‘the third sex’, as Maynard put it in 2011, with the reality that in a situation of extreme poverty and social rigidity such as East Timor’s, people must tender (sell) their bodies. The other meaning of the word ‘tender’ reaffirms the visual tone of these images and the sentiment Maynard invokes through making them. The artist was profoundly affected by his experience and sought to create images that showed this subterranean world of Dili without passing any moral judgment. He has achieved this by using deep blacks and ambiguous composition ensuring the photographs remain in the space of mutual observation, revelation and compassion.