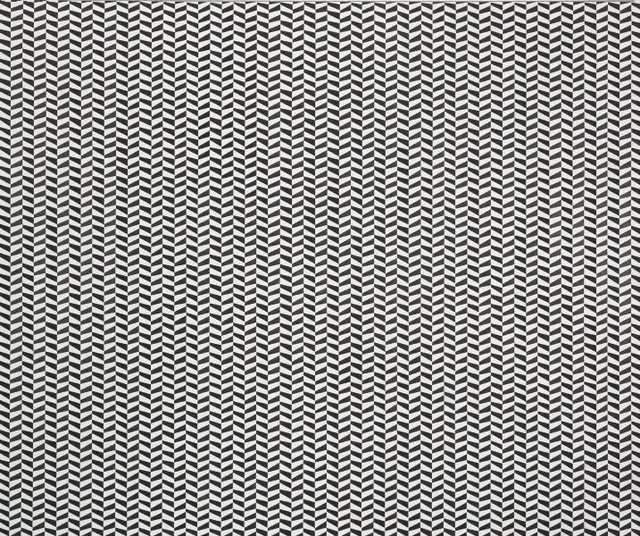 The title ‘Complete?’ refers to the fact this is the culminating work by Dawes in a larger series 'Double Dealing', the title of this particular work is a questioning as to whether this really is the end point of a particular exploration in her practice. Dawes, like most abstract artists, works in nuanced series where one development leads to another in their exploration of paint, form and colour on canvas. Dawes painted this particular work in a studio space within her dealer’s gallery, seeking a form of communality in the execution of the painting. Moving from a private studio in to a more public but still art defined space is not risky as it still presumes a culturally aware audience, but it does add sociability to the process of painting and Dawes was interested in taking the inherently performative practice of painting into a more public realm.

As with all of Dawes’s paintings the trace of the artists hand is important to the experience of the finished work. From a distance it may appear hard edge, flat and optical, but up close the brushstrokes and mark making are deliberately apparent and the works are obviously hand painted with oil on canvas. The painting itself has three forms of application, the white paint and the two different blacks, one more solid and one more watery. Dawes also works with a flat plane and with perspective space in this work, which gives the extraordinary haptic optical effect where the eye and the paint dance with each other, making it hard to still the act of looking and focus on the picture in front of you.

While this nods to 60s op art and the work of Bridget Riley, it is not a deliberately direct reference. Rather, this opticality has come about through the reduction and tightening of the patterning that Dawes has been using throughout the whole series. The variations from work to work explore the formal conundrums that drive abstract painters on to fresh discoveries. The larger shapes and their looser optical effect are worked through in colour in the other works, while in ‘Complete?’ the reduced palette gives great strength to the repeated patterning in this painting which was undertaken from March to July 2010.

The title of the whole series, ‘double-dealing’, refers to a type of ‘double speak’ perfected in politics during the Howard administration. This type of speech is also known as ‘dog-whistling’. In effect, messages are given to two audiences, one which appears above board and the other a message that is clearly there but can be publically denied – this type of ‘double-speak’ was most often heard when it came to matters of race, refugees and ‘the war on terror’ (see Milner). While there is no overt politics to Dawes’s paintings, their doubling space and optical shifts and were made in response to this concerning duplicity in our elected representatives.