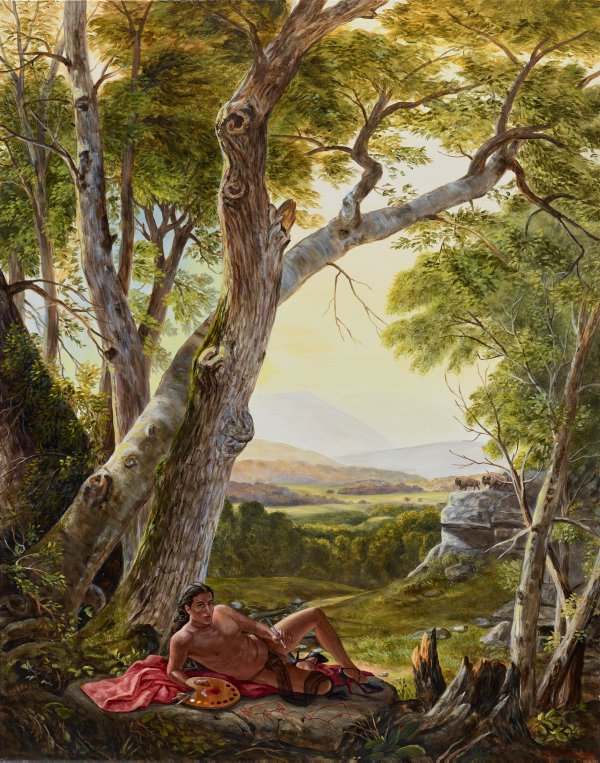 The allegory of painting

In the foreground of this painting the artist has depicted his gender-fluid alter ego, Miss Chief Eagle Testickle. Miss Chief performs the role of the “allegory of painting”, an art historical figure, popular in the 17th Century that nearly always depicted a woman (despite the fact that female artists are so often obscured in Western art history). Johannes Vermeer and François Boucher famously depicted the subject as did Artemsia Gentileschi who, like Monkman, executed a self-portrait in the guise of ‘La Pittura’. The landscape in Monkman’s composition is based on a Hudson River School painting, ‘Shandaken Ridge, Kingston, New York’ 1854, by Asher Durand which is held in the collection of the Museum of the City of New York. The artist’s reworking of this painting inserts a queer, indigenous perspective into the European tradition of romantic landscape painting – a tradition that played a prominent role in the imaging of lands occupied by colonial powers.

The work also meditates on the relationship between indigenous art and European modernism. As the artist wrote:

'Casting the Indigenous figure of Miss Chief in the role of artist offers a further challenge to Western creative values. In a stylistic nod to the millennia-old pictographs at Áísínaiʼpi (Writing-on-Stone, Milk River), Miss Chief paints a distant herd of buffalo on rock. Her subject matter speaks to the appropriation of “primitive” artistic forms by Western artists such as Pablo Picasso. I take Picasso’s bull – a deliberately-constructed symbol of his male virility – and reclaim it through Miss Chief’s depiction of the buffalo, matriarchal beings recognized as kin to Plains Indigenous people. Taken together, these elements of ‘The allegory of painting’ complicate Western ideals of art, gender, and landscape by asserting Indigenous relationships with those concepts.'