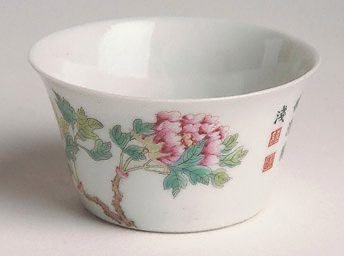 The depiction of a set of twelve different flowers to represent the months of the year is a recurring feature of Chinese decorative design from the Ming period onwards. At different dates, and in varying circumstances, a variety of alternatives were employed. This complete set demonstrates the flowers preferred in the 20th century. The peony, lotus, narcissus and chrysanthemum have been favourites since the Ming dynasty, but the fruit flowers such as peach and plum, and the magnolia, are definitely later preferences.