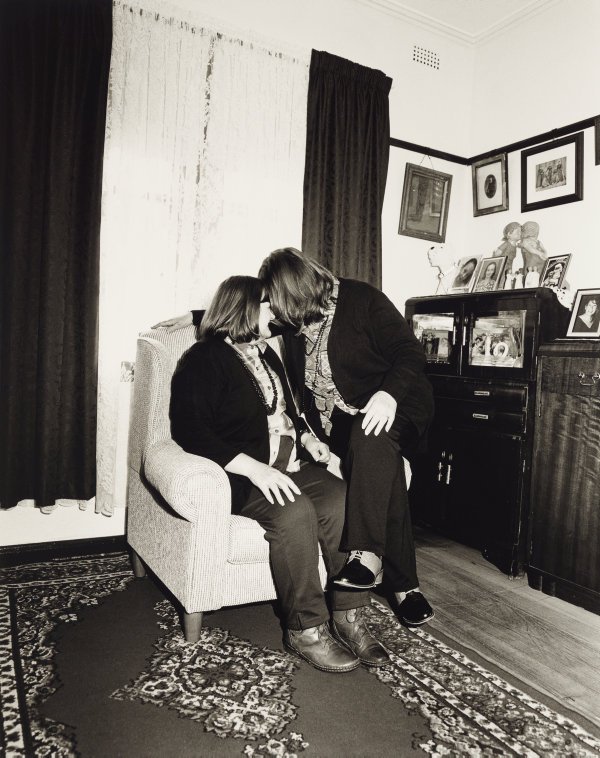 Emma Phillips is a young photographer based in Melbourne who has found a unique voice within the documentary tradition. Drawn to domestic spaces and the minutiae of daily life, Phillips produces photographs that read like narrative vignettes. They are studies of social nuance. Taken together, the works in each series often feel confessional and intimate; there is a trust between subject and photographer that is palpable, and often shaped by time. Phillips has returned again and again to the same community to shoot over several years. We routinely feel like we’re witnessing private and ungaurded moments but often something feels slightly off and unsettling.

This is true of 'Untitled (Denise and Diane twinning)'. Two women, huddled on a single armchair, face one another, their foreheads pressed together. Their pose is intimate but awkwardly so; it is an embrace without an embrace. But something else is odd. Though we can’t see their faces, the two women are near identical in dress, physicality and body language. We don’t need to be told they’re twins. Their bodies echo and reflect one another like a slightly off-kilter mirror. And then we start to notice all the other doubled forms in the image; the statuettes behind the women, the swans in the display cupboard. The echoes reverberate. What appears at first glance as a snapshot, a hastily captured fleeting moment, is densely layered and playfully complex.