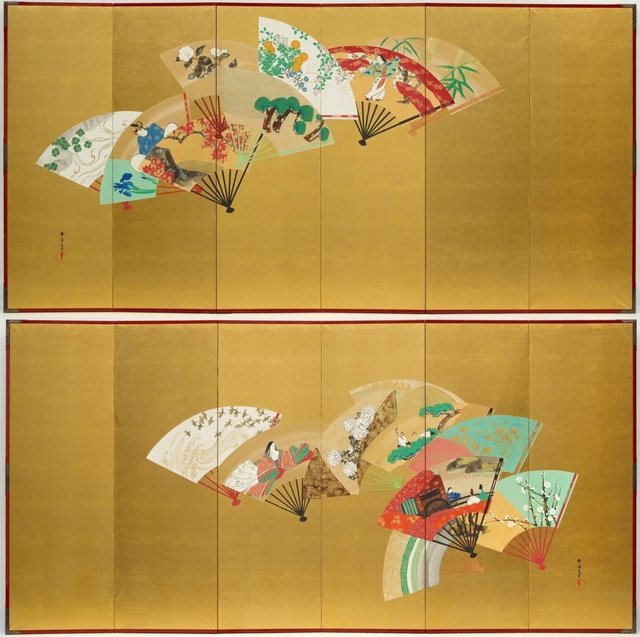 Designs of birds, flowers and figures on fans

Other titles:
Birds, flowers and figures on scattered fans
Location
Not on display
Further information

Kamisaka Sekka is considered to be one of Japan’s most significant artists, designers and art instructors of the first half of the 20th century. By employing newly developed aniline dyes and fusing motifs and decorative styles of Art Nouveau, especially the British Arts and Crafts Movement with traditional Rinpa painting styles and motifs, Sekka imbued Japanese designs with a flair of modernity and timeless, international appeal.

This pair of six-fold screens is a wonderful illustration of a 'picture-in-picture' composition (gachūga), in which the main subject of the screens – 17 fully opened fans – are themselves decorated with motifs drawn from courtly novels and poetry, as well as flowers and birds of the four seasons. The designs on the fans are carefully chosen to suggest a pictorial history of the Rinpa lineage: abbreviated landscape motifs in gold and silver paint and scenes based on the classical literature typical of Sōtatsu, stylised Kōrin waves and naturalistic Hōitsu flower paintings. Sekka includes images that are recurrent in his own works such as mushroom-shaped pine trees, red maples or cranes and pines, thereby firmly positioning himself within the Rinpa legacy.