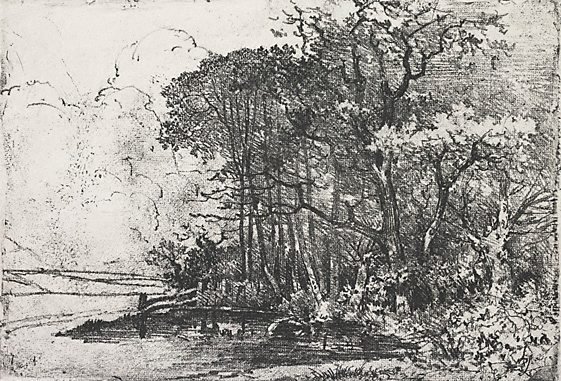 Crome was the founder of the Norwich School and was one of the very first English artists to consider etching as a major medium in his oeuvre. He was also largely responsible for keeping alive the art of original etching during the early 19th century.

In addition to pure etching, Crome became interested in using the tonal qualities of softground etching. By laying a sheet of paper over the ground on the etching plate and drawing onto it, rather than directly working the wax on the plate, the final bitten line becomes textural rather than clearly incisive.

Crome had probably seen this technique in Gainsborough's prints. By using this manner of etching he was able to create particularly beautiful and delicate qualities of light and atmosphere - the essence of the open-air landscape of early 19th century Norwich school art.

This composition is starker and more contemporary in feeling as a result of the open area of field and sky to the left. From the first edition of 60 impressions. As completed by Crome in c.1812. From the edition issued by the artist's widow in 1834. Almost no impressions dating from 1812 are known.