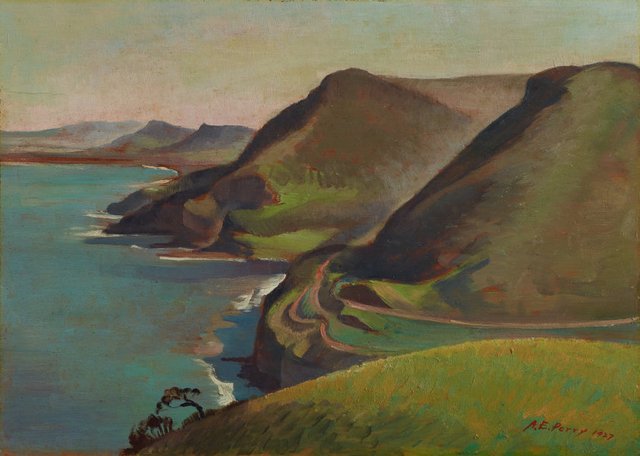 Other titles:
Coastal cliffs
Location
Not on display
Further information

Adelaide Perry was an important painter and teacher amongst the group of ‘Sydney moderns’ – the loose coalition of interwar artists whose work represents the first significant wave of modernist culture in this county.

Perry had first trained at the National Gallery School in Melbourne before enrolling at the Royal Academy School in London after she won a Travelling Arts Scholarship in 1920. She claimed it was the English Royal Academy painters including Charles Sims, Walter Sickert and Glyn Philpott who “taught me all the art that I know”. The work that she produced when returning to Australia, where she settled in Sydney from 1925, drew on the poetic essentialism of certain British painters but was more distinctly connected to the bourgeoning schools of modernism developing locally. During the late 1920s and 30s in particular, she created works that articulated the landscape through the modernists’ drive to essentialise, contributing to what critic William Moore stated in 1927 as “the most definite change in landscape painting since Streeton, Roberts and Conder.”

'From Stanwell Park' reveals certain characteristics that Sydney modern painters were adopting to address the landscape in new ways during the inter-war period. While based on her observations of the New South Wales south coast landscape, Perry expands on specific notions of place by downplaying naturalistic detail for an expression of heightened colour, volumetric mass and the rhythmically banded land formations. The slow, unfolding serpentine movement of the road through the hills and contours of the coastline express a sense of the metaphysically energised motions of the natural world that Perry, like her modernist counterparts, aimed to encapsulate in their landscape work.