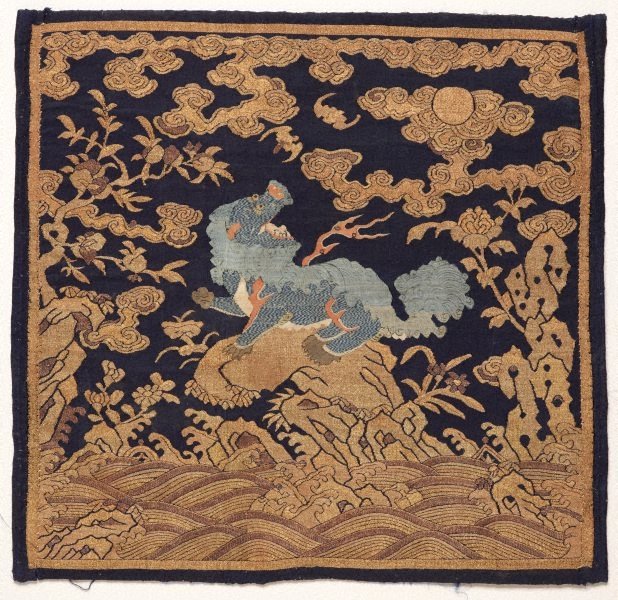 Rank badges were insignia badges worn by court officials to signify their status in the civil or military sphere. Two badges were attached to the costume, one on the back the other on the front which was split to allow the garment to be buttoned up at the front.

The badges were first introduced during the Ming period in 1391. From the Ming (1368-1644) to the Qing dynasty (1644-1912) the styles of the badges changed dependent on the tastes of the times - not necessarily only when the court dress regulations were published in 1652 and revised by Qianlong emperor in 1759. The best indicator of the time period of a badge are background elements such as water and cloud designs, as these could indicate what was fashionable at the time.

Civil rankings were based on the passing of demanding official examinations. Civil badges consisted of nine ranks each represented by a different bird, with only a couple of changes of bird types over the two dynasties. Military examinations were based on physical feats rather than literary and the rank badges are rarer. For example, towards the overturn of the Qing, military rank badges in particular were burnt to conceal identification. Military badges consisted of animals representing rank. During the Qing rank badges were generally worn by an official, his wife or wives and unmarried sons and daughters (Garrett 37)

Kesi (‘cut silk’) badges are a rarer and more valuable textile, whose complexities lie in the weaving technique. Schuyler Cammann noted that compared to the Ming period, many of the early Qing badges were embroidered. This could be due to 2 reasons: the fall of Yangzhou in 1645 and other cities which had silk weaving industries-resulting in the high cost of silk; and that woven silk appeared to be monopolised by the imperial classes with restricted use to nobles. (Cammann p. 97).

The symbol of the lion in this badge represents the insignia worn by a military official of the 2nd rank. A rare woven kesi tapestry consisting of a landscape woven in gold thread mixed with blue silk thread.