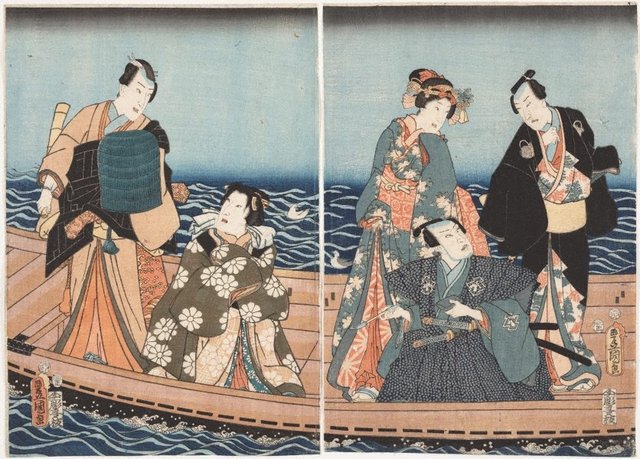 Boating excursion on the Sumidagawa

These two prints comprise the left and centre panels of a triptych depicting actors from the kabuki theatre. It was published in the first month of 1856 by Ōtaya Takichi. The missing right sheet contains the title cartouche, which translates roughly as 'Treasures of the Seven gods of good fortune riding together' (Shichifukujin takara no noriai). The centre panel shows Ichikawa Kodanji IV (1812–66) seated, Iwai Kumesaburō III (1829–82) in a female role and an unidentified actor; the left panel portrays Nakamura Fukusuke I (1831–99) in the guise of an itinerant monk and Onoe Kikugorō IV (1808–60) in a female role. The missing right sheet shows Kataoka Gadō II and Onoe Kikujirō II (1814–75) in roles from different plays. The appearance of the actors in roles most likely from various performances suggests that the composition was probably intended to celebrate fine performances by the seven actors in several different places rather than commemorate a specific play.