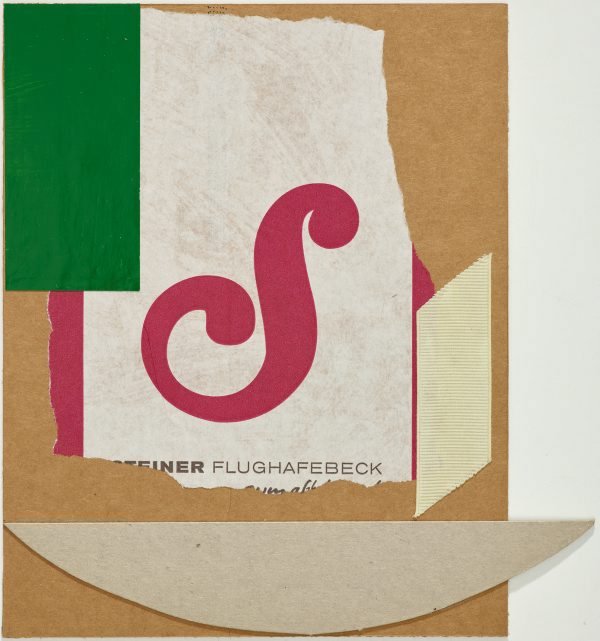 Collage is a fundamental and ongoing component of John Nixon’s practice that underpins his minimalist paintings. Collage reveals Nixon’s experimental working process in which he takes inspiration from the world around him and distils it into geometric cut and pasted compositions. “I can just walk around the block…and I’ll see something useful. I’m able to filter the mess of the world, and just see things that other people wouldn’t see…I’m importing information that I see. For my own use.” – John Nixon 2016

Nixon collages scavenged paper-based materials that operate through recognition and familiarity. Viewers will recognise fragments of everyday objects such as food packaging, paint colour swatches, sandpaper, newspaper clippings and stamps. These items become design elements within Nixon’s geometric compositions. The reverse of many of these collages reveals their former lives as packaging for pet food, cask wine and breakfast cereals.

Several collages were made while the artist was travelling, particularly in New York and Græsted in Denmark and bear the detritus of his travels. Elements sourced from whatever city he is in are incorporated, with clippings of his own photographs, local food packaging and newspaper clippings appearing. These materials are laden with specificity of time and place. One collage is made on the reverse of an invitation to his 2013 exhibition at Galerie Mark Müller in Zurich, Switzerland.