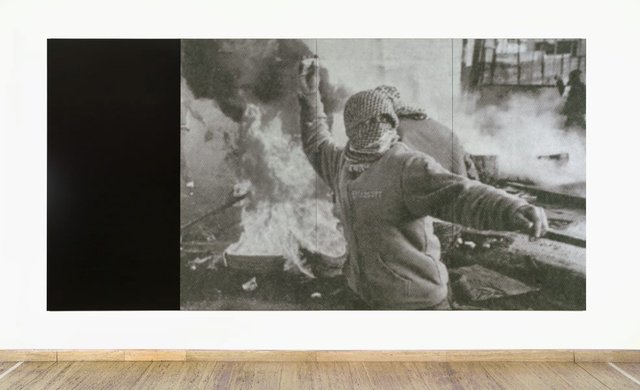 Marco Fusinato is a Melbourne artist/ noise musician who explores creative and political radicalism in a practice that spans installation, performance and recording, and various forms of visual media. Fusinato's 'Double infinitive' 2009 series addresses the relationship between mass media and political rhetoric through appropriation. A four-panelled white print on black aluminium presents a scene of a masked individual set against a backdrop of fire, smoke and rubble. He has been documented at a defining moment in an indeterminate riot - arm cocked and hand wielding a rock directed at an opponent.

This familiar 'hero shot' has been recycled from source material specific to the artist's interest in 21st century counterculture e.g. anti-capitalist pamphlets and news articles reporting revolutionary uprisings from around the world. The violent act of defiance, ahistoricised and devoid of ideology through de- and re-contextualisation (aestheticised and monumentalised from print through seriality and enlargement) attains the grace and beauty of a ballet dancer or athlete frozen in motion.

In undermining this narrative Fusinato draws our attention to history and the truth of events, its coverage and exposure (censorship, dramatisation and homogenisation) in the information age. He explains that 'this series is about media construct. What we don't see in these images is not just the row of police, but the even larger row of photographers- photographers waiting for that moment, for you to throw that rock' (Fusinato quoted in Dan Rule, 'Marco Fusinato - the zero point', Oyster #84, October/November 2009).