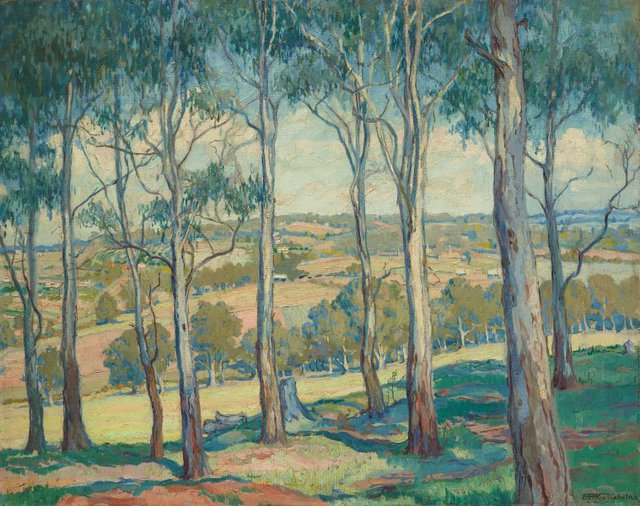 Through the gum trees, Toongabbie

From 1907-1918, the Ballarat-born Hilda Rix Nicholas lived and travelled extensively throughout Western Europe as well as making several trips to Morocco. While she held to traditions of representation in her art, the paintings produced during this time are marked by the post-impressionist influence of bolder colour and more simplified forms that Rix Nicholas combined with what became an enduring focus on the impact of light on her subjects. Her exhibiting history in Paris included a one-woman show in 1912 of works she produced in Spain and Morocco. Working between her studio in Paris as well as from the artist colonies at Étaples, Rix Nicholas achieved a considerable reputation as a painter and had works acquired by the French Government during this time.

The declaration of war, and the personal devastation that resulted for Rix Nicholas, put a halt to her travels. She returned to Australia in 1918 and lived and exhibited in Melbourne and Sydney. While she became known for her heroized portraits of soldiers at a time of emerging Anzac mythologies, her paintings that resulted from her tours of regional New South Wales gave impetus to a parallel artistic identity as an exceptional painter of the Australian landscape.

In 1924 Rix Nicholas returned to Europe and there, the following year, she exhibited her Australian subjects to great acclaim in Paris and Britain. Amongst these works was the outstanding landscape Through the gum trees, Toongabbie c1920. This beautifully orchestrated composition was designed to take in the expanse of the landscape through the horizontal and shadowed patterns of gum trees. Through her distinct palette, delivering inflections of blue brushwork across the brown colouring of the land, Rix Nicholas achieves a feel for the crisp, clear light of the vista, where clouds, trees and landforms all appear to move in rhythmic sync.

Through the gum trees, Toongabbie is a celebratory image of the Australian landscape. With the post war connotations of the restorative power of light and the land, the work is indicative of the larger ideas of place and of national character that Rix Nicholas promoted in her exhibition of Australian subjects in Europe in 1925.

Credit
Acquired with the support of the Art Gallery Society of NSW through the Dagmar Halas Bequest 2016
Accession number
323.2016
Copyright
© Estate of Hilda Rix Nicholas