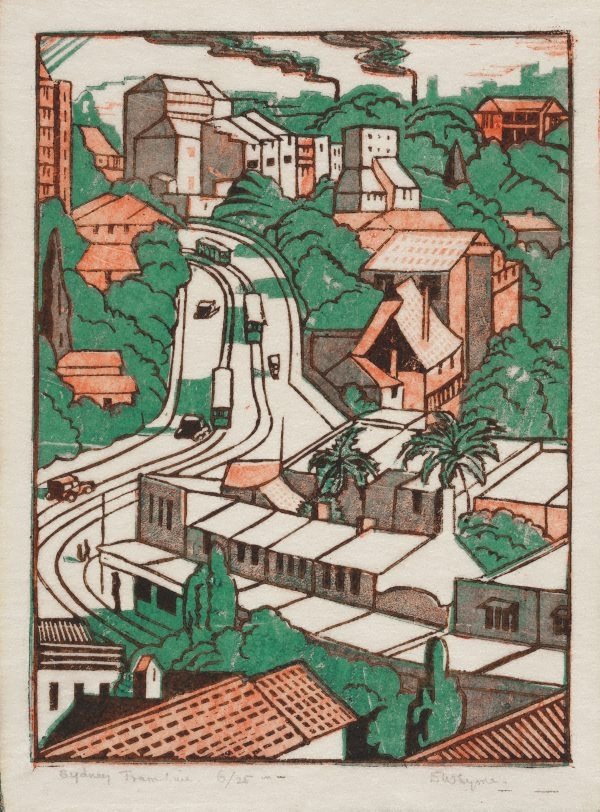 Eveline Syme was born at Thames Ditton, England to Australian parents and grew up in Melbourne. She studied Classics at Cambridge University, and education at the University of Melbourne. She studied art in Paris between 1921 and 1924, attended La Grande Chaumière, the Académie Ranson (with Maurice Denis) and with André Lhote. In 1924 she returned to Melbourne, and in 1925 exhibited her first woodcut. By 1927 she was making linocuts, probably taught by Ethel Spowers, a close friend. She exhibited woodcuts, watercolours and a couple of colour linocuts at the Athenaeum, Melbourne in March 1928. In the same year she discovered the work of Claude Flight from his recent publication 'Lino-cuts' and, inspired by the 'modern' quality of the work, returned to London in January 1929 to study with Flight at the Grosvenor School of Modern Art, located in Warwick Square Pimlico. She spent some months travelling in Belgium and Italy, returning to Australia in April 1930. Syme also had a great interest in Japanese prints, reflected in the composition of this work with its high viewpoint.