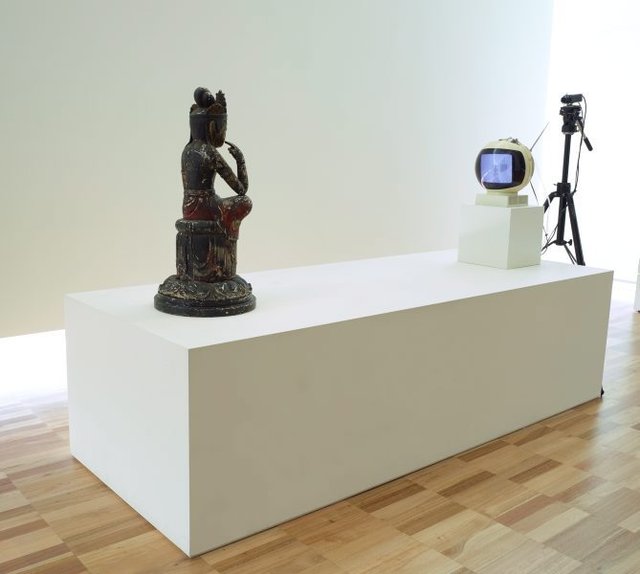 Nam June Paik was a pioneer of video installation in the early 1960s. Associated with the international conceptual movement Fluxus, Paik regularly collaborated with other Fluxus artists such as Joseph Beuys and George Maciunas.

In 1976 John Kaldor invited Paik and his collaborator, the cellist Charlotte Moorman to create a Kaldor Public Art Project in Australia. As part of the project Moorman played the ‘TV cello’. Made from three televisions removed from their sets so that their inner workings can be seen, with an attached cello bridge, tailpiece and strings forming a cello-like instrument.

‘TV Buddha’ was also made in Sydney in 1976 using an old wooden Maitreya (Buddha of the future) from the Kaldor collection. ‘Kaldor candle’ was made in 1996 for John Kaldor, who remained friends with Paik until the artist’s death in 2006. Both ‘TV Buddha’ and ‘Kaldor candle’ employ a conceptual use of video – first developed by Paik – in which a camera and a monitor loop in real time, blurring the object–subject distinction. This feedback idea was used by leading conceptual artists in the 1970s, including Bill Viola, Dan Graham and Mike Parr.