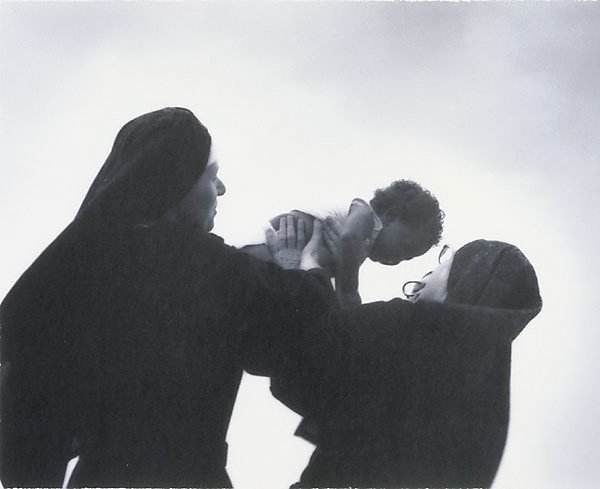 Tracey Moffatt’s photographic practice is firmly entrenched within the narrative and stylistic lexicon of television, film and media culture. Much of her work is based on recollections of media images from ‘a whole 1960s childhood and 1970s adolescence [spent] glued to the television or with my nose in a book’.1 She typically uses photography to raid the image banks of popular culture and personal memory, recasting familiar visual codes with an acutely critical edge. For example, her well-known 1989 series, ‘Something more’, draws on the imagery of B-grade films of the 1950s and the racy covers of schlock novels of the 1960s; while ‘Scarred for life’ 1994, references the photojournalism and photo essays of ‘Life’ magazine.

Like ‘Something more’, ‘Up in the sky’ returns to the subject of race and violence, presenting a loose narrative set against the backdrop of an outback town, ‘a place of ruin’ and devastation populated by misfits and marginal characters. Unlike previous series, it was shot on location and dispenses with the scenography which is a feature of her earlier work. ‘Up in the sky’ is one of Moffatt’s larger photographic series and takes many of its visual cues from Pier Paolo Pasolini’s masterpiece of Italian modernist cinema ‘Accattone’ 1961. The story hinges on a triangular mixed-race relationship. Of this work Moffatt has said: ‘My work is full of emotion and drama, you can get to that drama by using a narrative, and my narratives are usually very simple, but I twist it … there is a storyline, but … there isn’t a traditional beginning, middle and end.’2