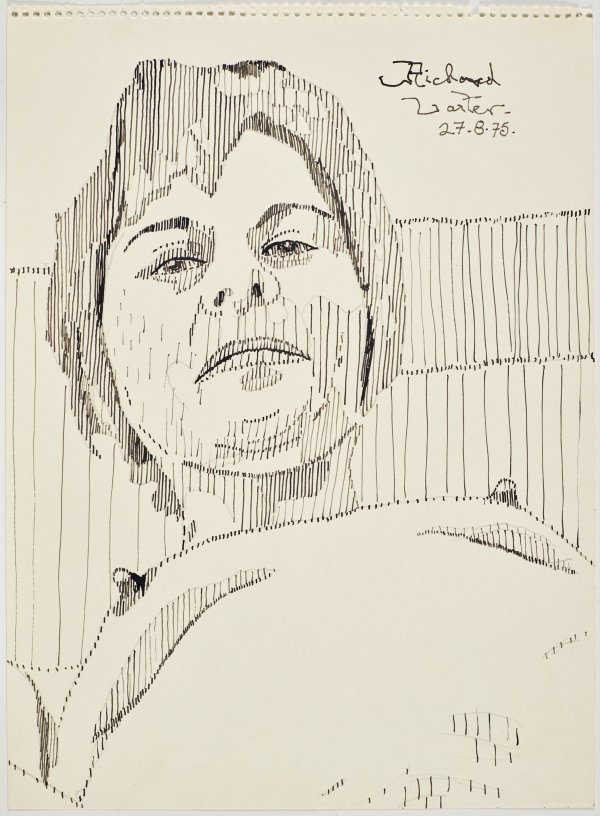 Richard Larter first came to prominence in Australia in the mid 1960s following his arrival from London with his wife, muse and collaborator, artist Pat Larter. His sexually explicit and sometimes confronting imagery, derived from pop culture and pornography, challenged Australian audiences of the period with their forceful anti-authoritarian stance and unusual experimental techniques.

Larter’s early paintings were executed using a medical syringe filled with paint which was then squeezed in fine lines across the surface. In the late 1960s he began experimenting with a different mode of painting, as his technique shifted dramatically towards a bolder, flatter application of paint in vibrant colour. Many of Larter’s images of this period are comprised of linear hatching and dots; he made a large number of drawings in pencil and pen (usually felt tipped) in the 1970s in which the image becomes flattened and reduced into hatched lines, expressive of his pop-inspired aesthetic.

Larter’s relationship with his wife Pat Larter as collaborator, model and muse became a major source of inspiration for both their work; this suite of drawings feature Pat as subject. In these works Richard Larter depicts Pat as a confident and provocative woman in control of her actions. He used hundreds of photographs of her, usually posed at close range, depicting her face and occasionally in the nude in provocative poses. Pat was an active participant and took on deliberate facial expressions and poses while being photographed.