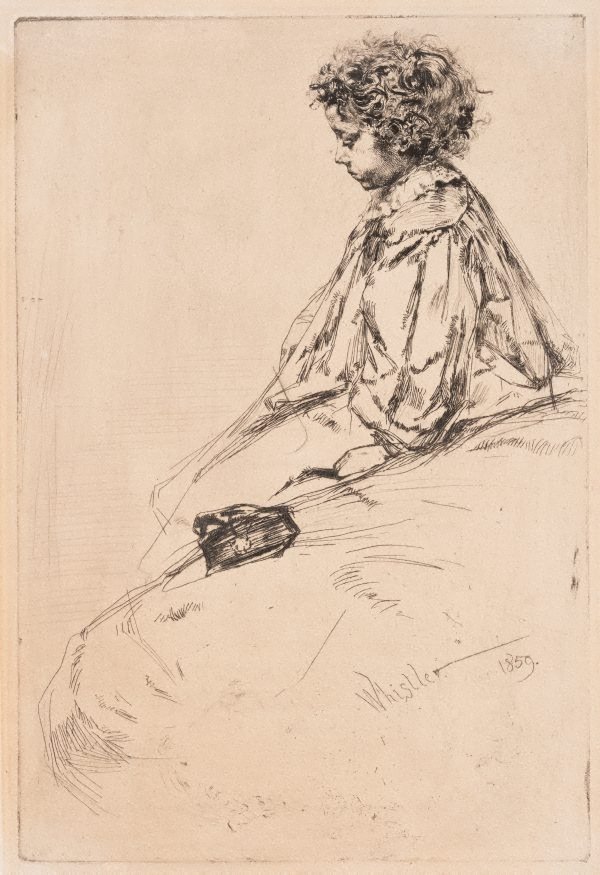 Whistler was born in 1834 at Lowell in Massachusetts, but spent much of his childhood in St Petersburg, Russia where his father was employed as a civil engineer. Following the death of Major George Washington Whistler in 1849, the family returned to America, and thereafter Whistler entered the United States Military Academy at West Point, where he continued his art studies. He later joined the US Coast and Geodetic Survey in Washington, learning there the rudiments of etching while working as a cartographer.

Aged 21, Whistler left for Paris to study art. He enrolled at the École Impériale et Spéciale de Dessin and attended Charles Gleyre’s studio, while enjoying the bohemian life of a young art student. Although he had very little in common with them artistically, Whistler kept company with a circle of English artists, including Edward John Poynter and George du Maurier, before befriending Henri Fantin-Latour and Alphonse Legros, who shared his interest in printmaking and admiration of Gustave Courbet.

In 1858 Whistler fell ill and went to London to stay with the family of his half-sister Deborah. She was married to the surgeon, Francis Seymour Haden, who owned a considerable collection of prints, particularly those of Rembrandt, and was on the path to becoming a highly accomplished etcher in his own right. Haden encouraged his brother-in-law to begin a number of etchings during his convalescence, and Whistler found convenient subjects in his young nephews and niece, whose enchanting portraits rank among the artist’s first important etchings.

In Paris the following year Whistler turned again to the subject of children when he made his first experiments with drypoint. He described this technique in a letter to the writer and critic William Ernest Henley in 1891, enthusing over its ‘soft velvety effect, most painter like & beautiful – and precious too’. Unlike etchings, drypoints are made without acid. Rather, the artist’s design is simply scratched into the copper plate with a needle, an action that produces the all-important burr, thrown up at the edge of the scored line. The rich, velvety blackness of the print is dependent on the burr holding the ink in a clogged manner. The main drawback of the technique is that the fragile metal burr quickly wears down, and only a small number of fine impressions can be printed. Nevertheless, the sense of preciousness and rarity surrounding drypoint must surely have captivated Whistler.

Bibi Lalouette was the son of the owner of a restaurant in the rue Dauphine, where Whistler was able to dine on credit. The little boy is shown in profile sitting on a bed, wearing a smock. Beside him is a soft cap decorated with a badge. The work combines with the refinement and originality of its mise-en-page a mood of intense introspection. Whistler made only two states of the print: in the first state there are light sketches in the lower part of the sheet, below the signature, of the boy’s face and a woman’s face depicted upside down.