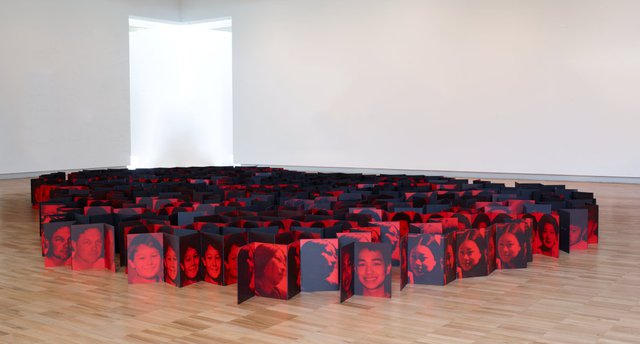 Other titles:
Birth & death
Location
Not on display
Further information

Lindy Lee (1954- ) is a senior Sydney based artist associated with appropriation practices of the 1980s and early 1990s. Lee's works from this period comprised of grid ded photocopied details from old master portraits, overlaid with veils of paint and sometimes splattered with ink and wax. They considered our cultural distance from European 'masterpieces' as well as the aura of an original and our experience of it through ubiquitous reproductive technologies.

From the mid-1990s onward Lee's questioning of cultural authenticity became a personal frame of reference for exploring notions of identity, displacement, transition and spirituality. The artist began to draw on her post-revolutionary Chinese heritage/ post-war Australian upbringing, explaining 'in addition to being falsely European, I came to realise I've been a false copy of a Chinese person...I felt like a white Australian although I didn't look like one; whereas at a Chinese club with my family, for instance, I looked like everyone there but didn't feel like them' (Lee quoted in Australian Art Collector, no 26, October/December 2003, p 57).

Lee's large-scale installation 'Birth and death' 2003 comprises of around 100 concertinaed Chinese accordion books extended on the floor in rows. Chinese accordion books are a traditional writing material used in Buddhist scripture that evoke multiple references in 'Birth and death' 2003. Firstly, to the instrument, which was spruiked by the People's Liberation Army as a form of entertainment during the 1940s. And secondly, to the photo album or even the passport, with each one unfolding to depict multiple portraits of living and deceased family members, friends, and even pets, at various stages throughout their life.

These images have been produced from copying photographs, and as such they exist in various degrees of light and dark, almost to the point of abstraction. The overlaying monochromatic red is emblematic of Imperial China and the Cultural Revolution.

The fading in and out crowd of portraits in 'Birth and death' 2003 links history, people and memory together across time and space in pondering, through the minimalist language of seriality and the artist's understanding of Buddhist cosmology, the impermanence and interconnectedness of life.