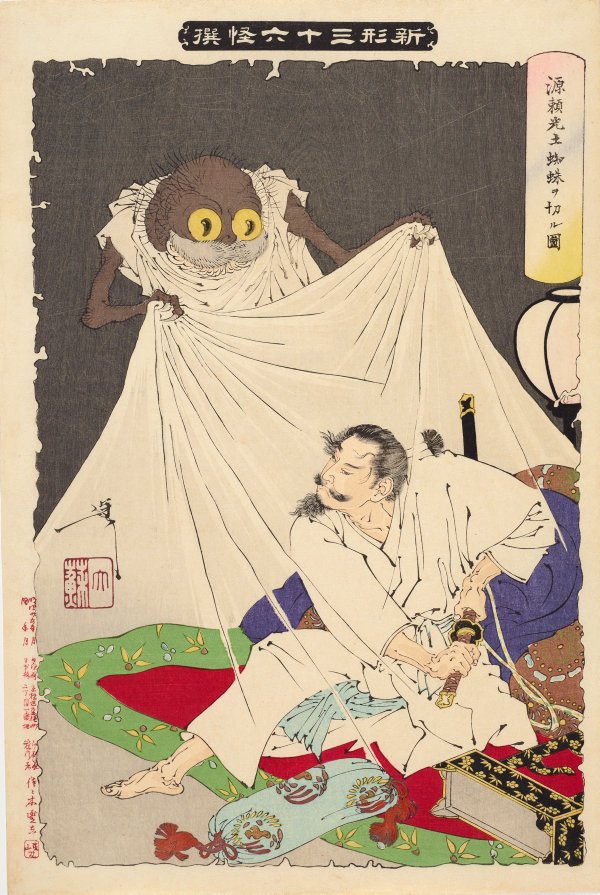 These woodblock prints from the series New forms of thirty-six ghosts by Tsukioka Yoshitoshi (1839-1892) present rich themes of folklore and the supernatural in Japanese legend. The Yotsuya ghost story relates to one of Japan’s most famous ghost stories, the tale of Oiwa and Iemon, while the print of Minamoto no Yorimitsu and the Earth spider draws on a tale from the history of Kyoto.

Known as Raiko, Minamoto no Yorimitsu (948 –1021) was a nobleman who worked with his associate Watanabe no Tsuna to rid Kyoto of its abundance of demons. One night, a feverish Raiko believed he was being attacked by demons and called for protection but his retainers soon fell asleep and Raiko was attacked by a giant earth spider. His weak cries and a trail of blood attracted Watanabe who used an uprooted tree trunk to kill the enormous spider. Once the spider was vanquished, Raiko made a full recovery. Yoshitoshi’s image shows the delirious Raiko fumbling for his sword while the spider lures him into its web.