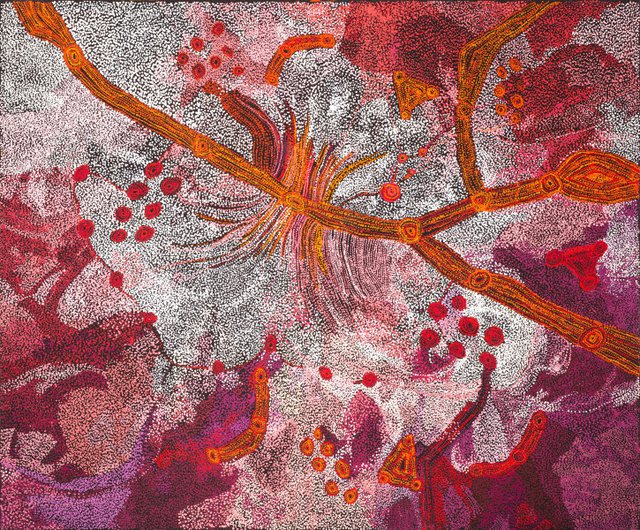 Sylvia Ken is from Amata community in the Anangu Pitjantjatjara Yankunytjatjara lands and has been painting since 1999. The seven sisters are a recurring subject within Ken’s paintings. The travels of these sisters across the night sky as they attempt to flee the unwanted attention of an older man are captured in evocative form within this work, which was awarded the 2019 Wynne Prize.

The art centre documentation for this work states:

The sisters are the constellation of Pleiades and the other star Orion is said to be Nyiru or Nyirunya (described as a lusty or bad man). Nyiru is forever chasing the sisters, known as the Kunkarunkara women, as it is said he wants to marry the eldest sister. The seven sisters travel again and again from the sky to the earth to escape Nyiru’s unwanted attention. They turn into their human form to escape from the persistent Nyiru, but he always finds them and they flee back to the sky. As Nyiru is chasing the sisters he tries to catch them by using magic to turn into the most tempting kampurarpra (bush tomatoes) for the sisters to eat and the most beautiful Ili (fig) tree for them to camp under. However, the sisters are too clever for Nyiru and outwit him as they are knowledgeable about his magic. They go hungry and run through the night rather than be caught by Nyiru. Every now and again one of the women fall victim to his ways. It is said that he eventually captures the youngest sister, but with the help of the oldest sister, she escapes back to her sisters who are waiting for her. Eventually the sisters fly back into the sky to escape Nyiru, reforming the constellation.

This exemplary painting by Ken is an example of the purity of the artistic practice that stems from the APY Lands and is inspiring and changing the way the Australian public and the world connect with First Nations artists and their enduring legacies.