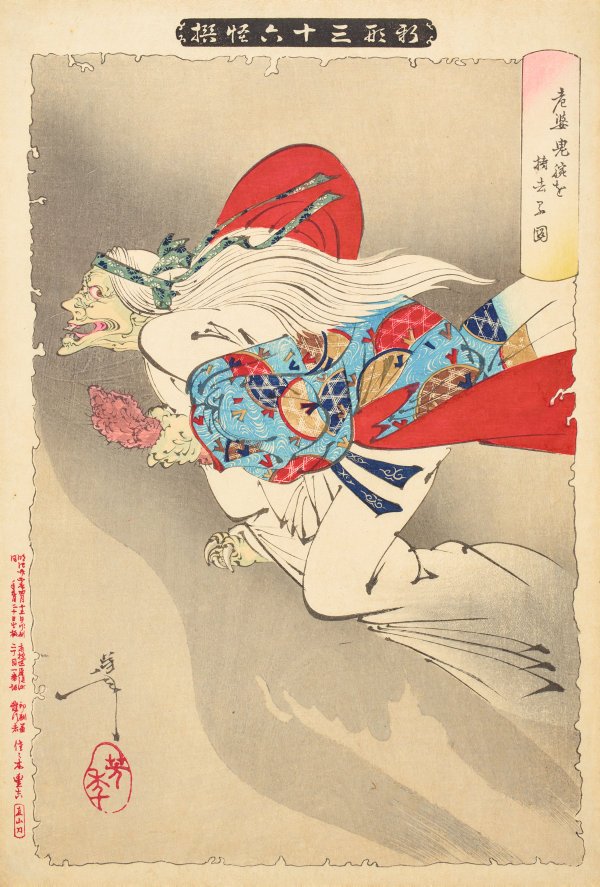 The old woman retrieves her arm, from the series New forms of thirty-six ghosts

Watanabe no Tsuna was a retainer for the 10th century general Morimoto no Yorimitsu, and was instructed to rid the countryside of bandits and thieves. One of these outlaws was a demon named Ibaraki who preyed on travellers at the Rashō Gate. One night Watanabe waited at the gate and nodded off to sleep when suddenly he felt someone touch his helmet. Stunned, he used his sword to slash above his head, cutting off the arm of the attacker, who instantly fled. Watanabe was advised by a Shinto priest to place the hairy arm in a box, not let anyone see it, and perform rites over it. A few days later, Watanabe’s elderly aunt Mashiba arrived and wanted to see inside the box. Watanabe reluctantly showed her only to discover that she was Ibaraki in disguise. The image created by Yoshitoshi shows Ibaraki flying away clutching her arm. Her clawed foot, wizened face and streaming white hair are further indication that she is a demon.