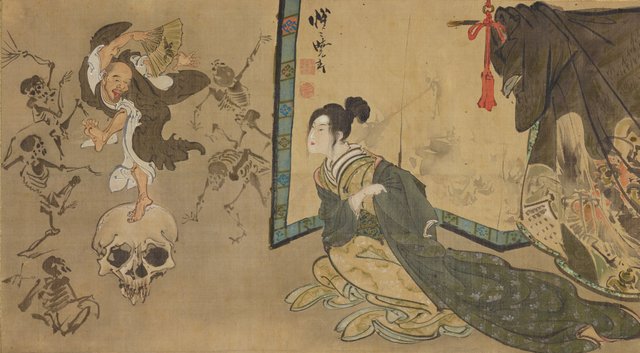 The artist Kawanabe Kyōsai was known during his lifetime for his political satire, artistic skill and eccentricity. Although trained in the established Utagawa and Kanō schools, the artist worked independently and produced some of the most imaginative images of the late Edo and early Meiji periods. Kyōsai was primarily a painter but also designed exceptional prints. He was a close friend and teacher of the English architect Josiah Conder (1852–1920) who lived in Japan from 1877 until his death.

The Hell Courtesan (Jigoku-dayū) derives from legends of a 15th-century woman who dressed in robes decorated with images of the Buddhist hells. One of the most recognisable figures of supernatural Japan, she was a devout Buddhist whose faith was inspired by the Zen monk Ikkyū of the same period. Ikkyū is still much admired in Japan for his anti-establishment behaviour. In this painting Ikkyū is shown dancing on a skull.