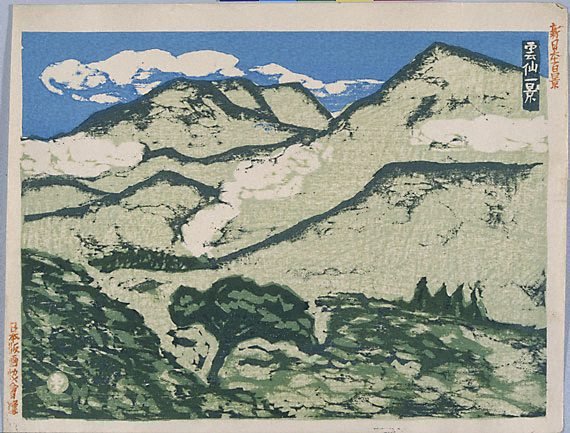 A view of Unzen, from the series New hundred views of Japan

Onchi Kôshiro is arguably the most important printmaker in modern Japan and the first Japanese artist to work in abstract expression with his 'Bright hours' made in 1915. An art student who admired works by Takehisa Yumeji, Onchi first emerged as a printmaker with 'Tsukuhae', a magazine of prints and poetry with Tanaka Kyôkichi and Fujimori Shizuo in 1914. The magazine ceased in 1915 with Tanaka's death, but it marked a major step in the Creative Print Movement (Sôsaku Hanga Undô) which had begun during the first decade of the 20th century by artists who took up the print as means of self expression rather than as means of reproduction of images. In this context, the magazine marked the beginning of the expression of emotional and psychological anxiety in the creative print movement. Onchi pursued his interest in abstract expression whilst continuing to produce figurative works.

This series of prints is a unique set of prints in two ways: at least thirty contemporary artists collaborated in a single series of landscape prints, depicting both famous places & scenery of modern urban life. This series is a product of the Creative Print Movement, a modern movement in printmaking which began early in the 20th century by artists who designed, blockcut & printed their own work with a clear intention of creating works of art as opposed to `surimono', reproductions. Due to the intensification of WWII, publication of the series was stopped by the Japanese authorities who feared that the interior of Japan would become known to its enemies.