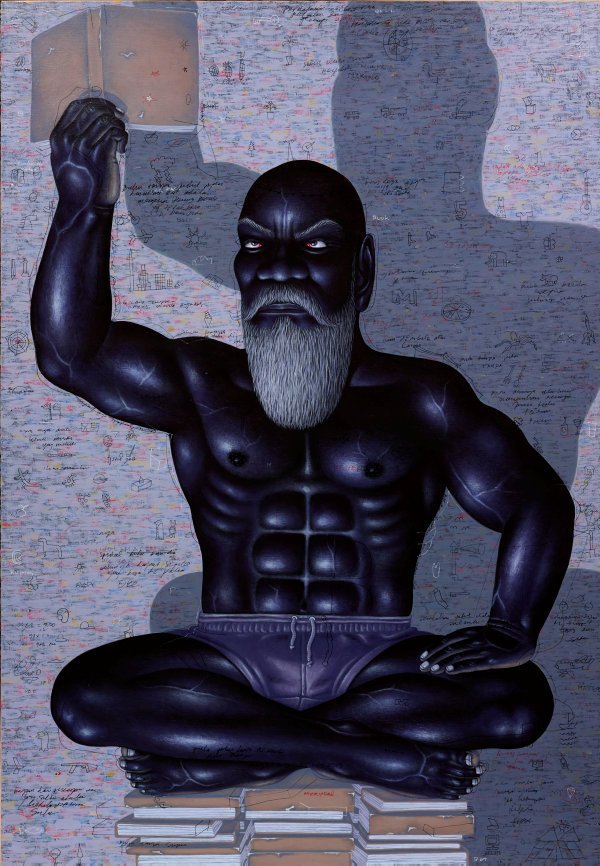 Inspired by the heroes and graphic conventions of comic books, Masriadi paints pictures of the body as a site of comical and satirical reflection. Muscular, bare- chested figures often pictured in tense combat, dominate his tightly framed compositions. Their powerful and glistening bodies, squeezed into the picture frame are often exposed to ridicule, sometimes clothed in ill-fitting colourful undergarments and other times undermined by political subtexts. Textual commentaries added in the form of captions and speech bubbles complete the homage to comic books and give voice to the figures, who embarrass themselves through stupidity or seek to embarrass others through abuse.

In this painting, a supposedly learned man sits like a meditating figure on a pile of books. His posture resembles that of nomadic ascetics that once mediated in the forests and caves of Indonesia. Wearing gym or boxing shorts, his huge frame casts an even bigger shadow over the coded drawings and inscriptions behind. He is reading an untitled book held high in his right hand. His bloodshot eyes are strained and remained fixed as though eyeing off an opponent. Are we to believe that this image is about reading and learning? The joy of reading seems to be overshadowed by a sense of frustration, aggression and even violence.

The background of the painting is full of what appear to be inconsequential marks, which in the Balinese painting tradition are known as aun aun (decorative motifs included to fill in space and complete the overall composition). They are in fact sketches of machinery, animals and plants that make up the world we live in and are a very gentle nod to process, progress and the history of human civilisation. Black drafting lines are left to provide proof of structure and additional text appear to be notes to an unsure self.

The painting’s title, 'Untitled book', may allude to a book for which Masriadi doesn’t want to give a name, but it seems more likely that it is a reference to art itself. In the history of modern art, in cases where the subject of a painting is unclear or abstract or where the artist chooses not to be clear, paintings have frequently been called 'Untitled'. This painting of an untitled book may in fact be a playful reference to art-making, to art history and to Masriadi’s own place in the contemporary art world. The words DADA and MASTER are scrawled on the chest of the seated figure. If we read this painting as autobiography, should we understand Masriadi as a frustrated student struggling to read yet another art history book, to paint yet another picture? Or, is he instead a mindful unflinching master who has already read many manuals and painted several valuable paintings with which he has established his career?