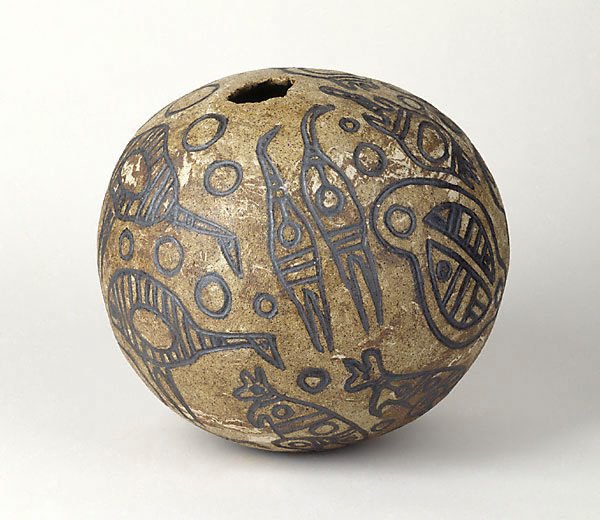 In 1971, after beginning her artistic career as a painter, Thancoupie travelled south from her coastal home in Napranum (Weipa), in far north Queensland, to study ceramics at East Sydney Technical College in Sydney. Thancoupie grew up at the Presbyterian Napranum Mission, where she experienced the use of clay in a ceremonial context. The opportunity to handle clay inspired her to complete her studies. Thancoupie is now Australia's foremost Aboriginal ceramicist, with a professional career spanning more than 30 years.

Thancoupie's strong Thanaquith background ensured a childhood rich in traditional customs, but many years of Christian influence and well-meaning but destructive assimilation policies had a significant impact on the continuation of Thanaquith culture. As a student, Thancoupie returned often to Napranum to learn of her ancestral histories from the old people of the community, with a view to preserving their stories through the design and decoration of her bold, sculptural forms.

During these years, Thancoupie designed a set of unique visual symbols and totemic characters that she continues to use to this day. The duality of the human and the natural world is integral to Aboriginal culture and ceremonial custom. Many of Thancoupie's characters are anthropomorphic, with creatures of the natural world showing human characteristics. She has translated her community's stories into a series of visual images, and decorates her stoneware with these narratives. Thancoupie refers to the end results as 'story pots'. These objects both in their physical creation from earth, air, water and fire, and in their finished form as spherical story pots – embody the artist's relationship with her land, her culture and the natural world.

Thancoupie was one of the first generation of Aboriginal artists to explore art making in an academic environment, far from her people and home. She has created public art murals that can be seen in Brisbane, Sydney and Melbourne, as well as those executed when she was an artist-in-residence in Edmonton, Canada and Colorado, United States. Thancoupie features in many documentaries and has shown at scores of exhibitions nationally and internationally as a solo artist. Her life and work was the subject of a monograph published in 1982. In the early 1980s, she relocated from Sydney to Cairns, Queensland, where she produces ceramics from her base at Trinity Beach, continuing her work as an artist actively committed to the preservation of her distinct cultural heritage.