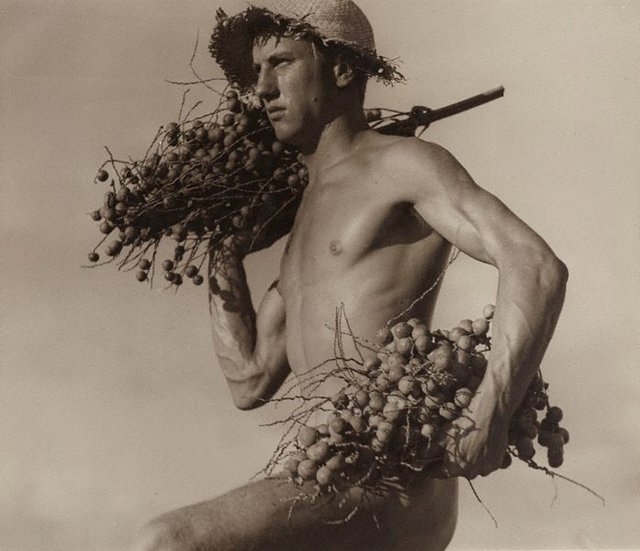 ‘Husbandry 1’ is from the portfolio of male figure studies that won Keast Burke associate membership of the Royal Photographic Society in 1941.1 Burke had begun working with the male figure around 1938 inspired by his interest in classical literature and art which had blossomed when he was in the Middle East with the Australian Imperial Force from 1917 to 1919. Burke wanted to show the nature of man as being active and so he took a substantial number of photographs where the model is associated with sport (javelin, discus) and with trades of various sorts (building, sailing, farming). The model for ‘Husbandry 1’ was his wife’s brother. Burke was as influenced by the times in which he lived as Dupain and so one can read not dissimilar notions into his photographs: the sense of impending war and the necessity for bodily strength, vitalism and neo-paganism.

‘Husbandry 1’ depicts the nude male as young, strong and vital. The figure against the flat sky is monumental, having been shot from slightly below. The steady gaze into the sun and sombre expression, the muscular arms holding what appears to be fruit from the ‘Jelly Palm’,2 exhibits readiness and fitness. The straw hat is a similar shape to a soldier’s helmet so that the image presents a web of contemporary ideas to do with activity, supremacy, beauty, masculinity, classicism and the corresponding loss of these. As Isobel Crombie has pointed out, the tanned body and the emphasis on the life-giving force of the sun, which is clearly an important aspect of this photograph, was common in such images. Diseases such as tuberculosis and rickets were a scourge between the wars and exposure to sunshine, as well as nudity, was considered to be an important part of a cure.3

1. ‘Australian Dictionary of Biography’, vol 13, 1940–80, Melbourne University Press, Melbourne p 303 states that Burke was elected to the ARPS in 1938, however the family are categorical that it was October 1941
2. The ‘Jelly Palm’ (‘Butia capitata’) originates in Brazil but is widely grown in Australia for its ornamental qualities and delicious fruit. Burke mentions in ‘Australasian Photo-Review’, May 1941 p 160, that he used Kentia palm seeds but the Royal Botanical Gardens, Sydney, are certain that the fruit in ‘Husbandry 1’ is not from the Kentia Palm
3. Crombie I 2004, ‘Body culture: Max Dupain, photography and Australian culture, 1919–1939’, Peleus Press/National Gallery of Victoria, Melbourne p 149