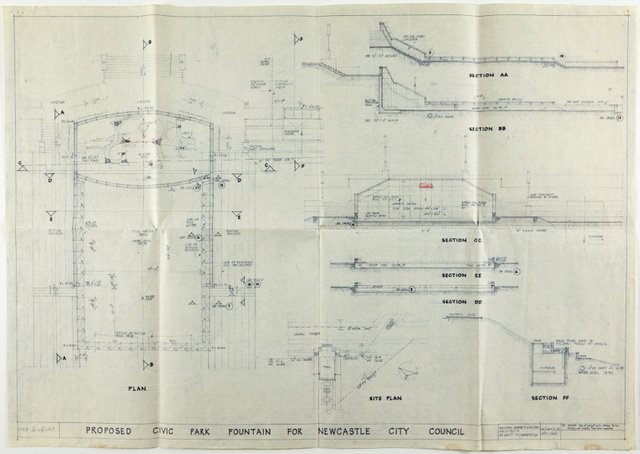 In 1961 Margel Hinder won the competition to design a fountain for the Civic Park in Newcastle. It was completed and officially dedicated on 2 November 1966. A few weeks earlier, Margel Hinder described the work to a reporter from the 'Newcastle Herald'. She said: 'I wanted to do a fountain that would read as sculpture when the water was off and when it was on. I have planes of water that form shapes related to the sculptural shapes...What was my initial idea? Well, I tried to keep it low. I felt height did not fit into this space, so it has a sort of flat plane on top. The whole thing is worked on a spiral. You see, people can look at this from all angles, except the back floor, so it is almost completely three-dimensional. I hope I have got a certain rugged character because I feel this city has that character.' (3 October 1966)
This plan of the site where the fountain was installed was prepared by the Newcastle architectural firm of Wilson, Barnett & Suters. It shows not only the site of the fountain, but also the landscaping around it.