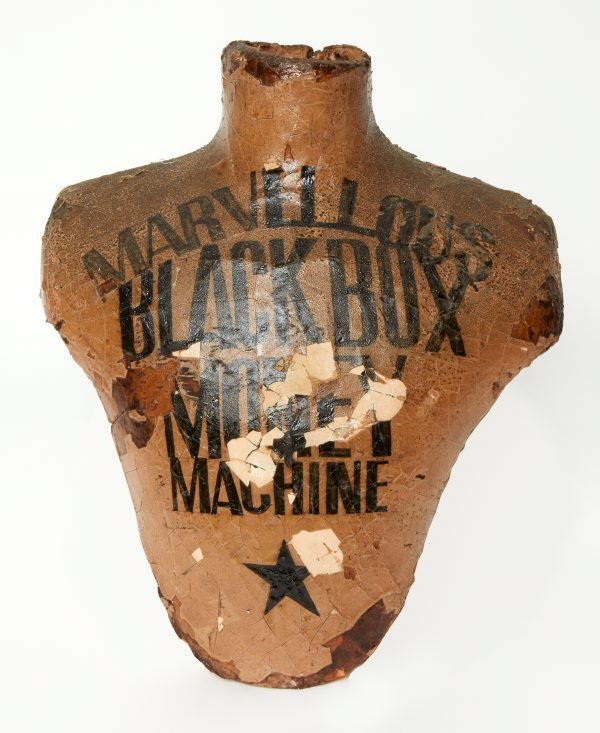 In 1969 Herbert Flugelmann, with students he was then teaching at the Kogarah Technical College, constructed the Black Box at his home in Oyster Bay as a ‘total environment’. Participants entered the Black Box through a tunnel, which shrank as they passed through it. This eventually spilled out into a dimly lit space filled with inflated plastic objects.

Flugelman described how the environment came about: "On my block at Oyster Bay, I had started to build a new studio, which was built out of 12 by 12 ironbark hardwood from barges that were demolished and sold at Glebe. So I bought a trailer load of them and so had these massive uprights going 15 feet up for the height of the studio and then great beams across and a concrete floor, and I hadn’t got any further than that, so that was the site. I don’t remember in detail how the thing precisely came about but we very quickly agreed we would make this into a box. We would put black plastic around it, inside and outside, and roof, and we would put a ten-ton truckload of sand for the floor. So we had that. Then adjacent was a four-car carport, and so from then we theorised that we should have the entrance to the black box there. And what to do with the carport space? There was a council tip not far away and we went down there and we found things like an old pram, junk, and we very quickly developed an aesthetic about what was good junk and what was bad junk. Interestingly enough, not only did we do that but the attendants at the tip, who asked us what we were doing taking junk away and we explained what we were trying to do, they entered into the spirit of the thing and started to put stuff aside because it was ‘good junk’. And from somewhere else I got a huge amount of cadmium yellow paint and so everything was painted in cadmium yellow and put together like that. So we stacked this stuff in the carport area right up to the ceiling and had a tortuous path leading through it to the entrance into the black box. And I had installed another six or seven thousand watts of light in order to make it as bright and blinding as possible. And that path that led through this junk to a depth of about 15 inches, we had chopped up remnants of polythene, off-cuts as they had come from the factory, so you had to walk through that 15-inch deep path of polythene and to arrive at a door. The door had been taken off and on the door-sized aperture there was black plastic leading in to an opening about three feet by two feet, which had a black curtain, and you had to duck and climb through that to get into the black box, and there was a car headlight shining into your eyes as you entered this tunnel and you were totally disoriented as you came into the black box."

This torso was placed outside the Black Box and people were encouraged to put a donation into it.