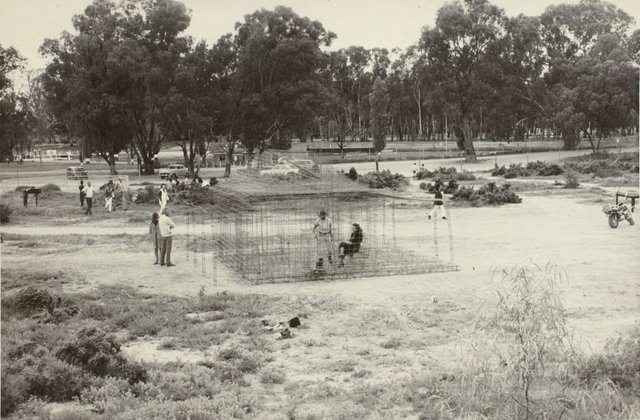 Herbert Flugelmann constructed the 'Australian cottage' for the Third Mildura Sculpture Triennial in 1973. Tom McCullough was the director and curator of this exhibition.'Australian cottage' was number 47 in the catalogue to the exhibition and described as "Reinforcing mesh, actual size 152 x 915 x 915 cm". In this year the Triennial was largely relocated from an exhibition building to an outdoor site on the Murray River. Flugelman's full-size cottage was modelled on an actual colonial house outside Adelaide. Inside were geometric representations of chairs, a bed, tables and cupboards. At times Flugelman occupied the house, accompanied by curator Julie Ewington, who performed domestic activities in the setting, such as making tea. At other times the public could enter. As the exhibition progressed, the cottage began to be overgrown with native grasses and flora, with the work becoming a metaphor for the doomed post-World War 1 soldier settlements in the Mildura region.