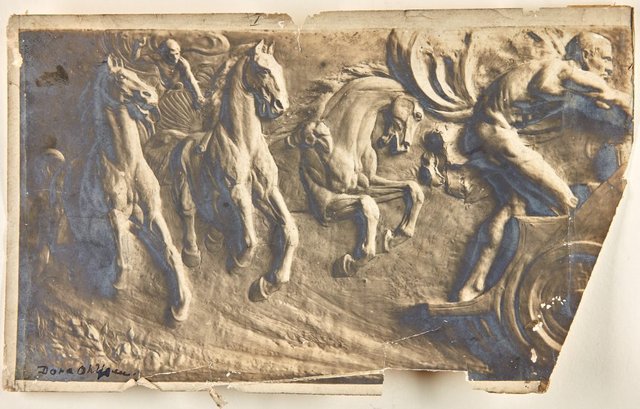 In August 1913 Dora Ohlfsen was commissioned by the trustees of the Art Gallery of New South Wales to complete a bas relief bronze panel for the facade of the Gallery, to be placed directly above the entrance door to the Gallery. She worked on it from her studio in Rome.
In December 1914 she heard from the trustees of their satisfaction with her progress. She had sent them designs for a panel depicting a chariot race. On either side of the panel, portrait roundels of Michelangelo and Leonardo Da Vinci were intended.
In July 1915 members of the Venice Biennale visited her studio and saw the Art Gallery of New South Wales panel, along with other commissions. She wrote to the director of the Gallery in the following year: 'One half of the panel is finished, that is in plaster.' By 1917 the whole plaster cast was completed. She sent these photographs to the trustees in Sydney shortly after. However, in 1919 they decided to cancel the commission, citing a shortage of funds. Ohlfsen challenged their decision, questioning the large amount of money they were spending securing the two large statues by Gilbert Bayes for the front of the Gallery, and suggesting they install the plaster version of panel and paint it to resemble bronze until funds were available. The trustees remained unmoved and her panel was never installed. Sir John Sulman, chair of the trust wrote to Gother Mann, director of the Gallery: 'Miss Ohlfsen is a woman, and although she has no case, can cause mischief'.