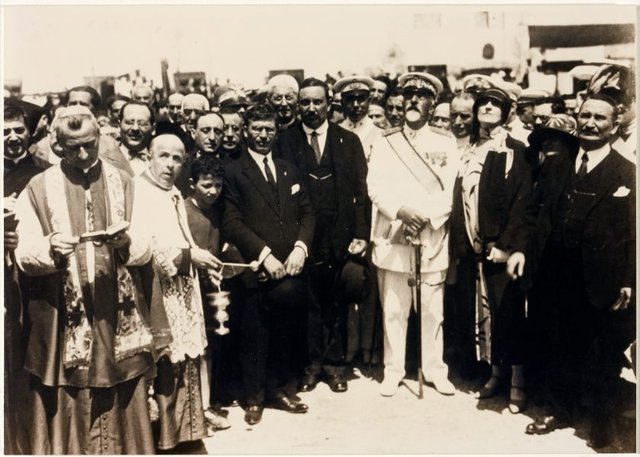 The Archbishop of Gaeta, Admirals Simonetti and Sirianni with Dora Ohflsen and others at the dedication of the Formia war memorial by Dora Ohlfsen

Through the patronage of her friend, Duke Fulco Tosti di Valminuta, Dora Ohlfsen was entrusted with the design for a war memorial at the naval base of Formia, near Naples. She began work on the memorial in 1923, and received no payment. The memorial was dedicated on 18 July 1926 in the presence of the Admiral of the Italian fleet, the Archbishop of Gaeta and a number of war veterans.
The main sculptural element of the memorial - the figure of Sacrifice - is an Italian youth, typified as a vital young soldier leaping forward to offer himself in sacrifice. Ohlfsen intended to evoke in plastic form a verse from Leopardi’s poem ‘To Italy’:

In this photograph, taken at the dedication of the memorial, Ohlfsen stands next to Tosti di Valminuta, who is dressed in his naval uniform.