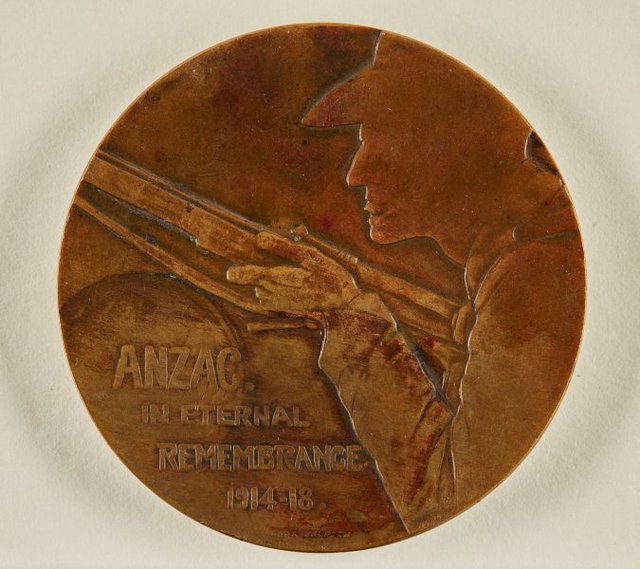 Other titles:
Anzac medal
Location
Not on display
Further information

Dora Ohlfsen's Anzac medal is Australia’s first artist-made commemorative medal honouring the Anzacs. She intended it as the first of a series of four medals. In January 1917, she wrote to the director of the Nationa Art Gallery of New South Wales: 'I am doing a series of medals on my own account to commemorate the war. One for Anzacs, which is finished, one for the Italians, one for the artists of the French Academy (Villa Medici) in Rome and one of the Russian Cavalry.'
On one side is the figure of Australia crowning a dead son with laurel. The other shows an Anzac, with gun cocked in silhouette. She noted, 'I have made ‘Australia’ and her son very young—representing as they do the youngest country and the youngest army'. The figure of Australia was modelled on a 21-year old Australian girl living in Rome, Alex Simpson. Simpson was born in China, the daughter of the British High Commissioner, and had worked as a Red Cross nurse on the Italian front. She was chosen by Ohlfsen as 'she is a type most clearly approaching that of the Australian girl at her best'.
To promote the medal, Ohlfsen went to London in July 1919, where she negotiated to sell it under the British War Charities Act in aid of permanently disabled Australians and New Zealanders. A committee to manage the funds was established, including Sir Charles Wade as chairman, Graham Lloyd and Generals Birdwood, Monash and Talbot Hobbs. The Prince of Wales accepted the first medal struck. Profits from sales were given to the Australian Branch of the British Red Cross Society.
This plaster cast bears the date 1915-16, as the Anzac medal was originally modelled in October 1916. However, the medal was eventually adapted for the post-war effort to include the inscription ‘1914–18'.