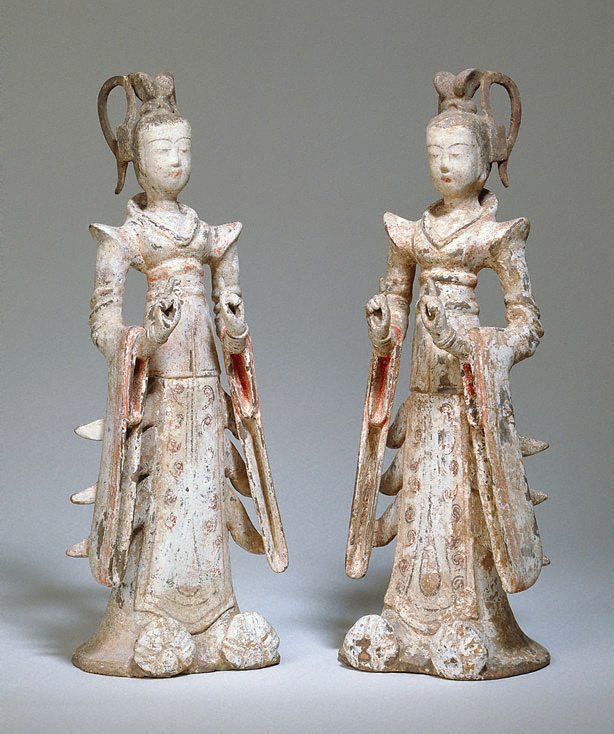 The most elegant of the Tang tomb figures on display is undoubtedly this pair of slender and graceful models of court ladies. They are often identified as princesses, but are possibly dancers whose elaborate costumes and high coiffures were the height of fashion in Tang China. The pieces can be dated on the basis of the high waisted dresses. Such fashions were popular in the late 600s. However in the early 700s, when Emperor Ming Huang fell in love with Yang Guifei, whose fuller figure needed more voluminous robes, fashions had to change.

Under the Tang dynasty (618-906) China again witnessed a great period of prosperity and expansion, based on an efficient central administration and a lively trans-Asiatic trade. The period of wealth lasted from the second quarter of the seventh century until about the middle of the eighth century. The wealth and cosmopolitanism of this period is to be seen in both the quality of the works of art and their wide variety of artistic sources. The decorative arts reflect influences from Persia, the Near East, and, through Buddhism, India.

During the Tang dynasty, the capital of Changan was one of the most cosmopolitan cities in the world with a population of about two million. By the beginning of the seventh century the Tang rulers had built an extensive empire. Merchants from the West passed through oasis cities with their caravans laden with Western goods. Foreigners of every description came to Changan: Turks, Persians, Arabs and Jews. Foreigners came as merchants and entertainers or to serve as attendants at the Imperial court or in the households of the nobility.

Ladies with gowns and headdresses elaborate as these are wearing are rare among Tang figures. Their ornate style of dress with its flame-pointed sleeves, shoulder pieces, and narrow waist is in the latest fashion. The dress, the stylish headdresses and the large turned-up shoes place these ladies in the highest echelons of Tang society.

Tang figures were produced for rich and poor, but during the Tang dynasty, manufacture of these figures became such an expensive industry, that the government was continually issuing edicts limiting the number of tomb figures allowed in a tomb. Funerals, the elaborate street parades associated with them, and the number and size of the tomb figures were as much symbols of the status of the bereaved as marks of respect to the deceased.