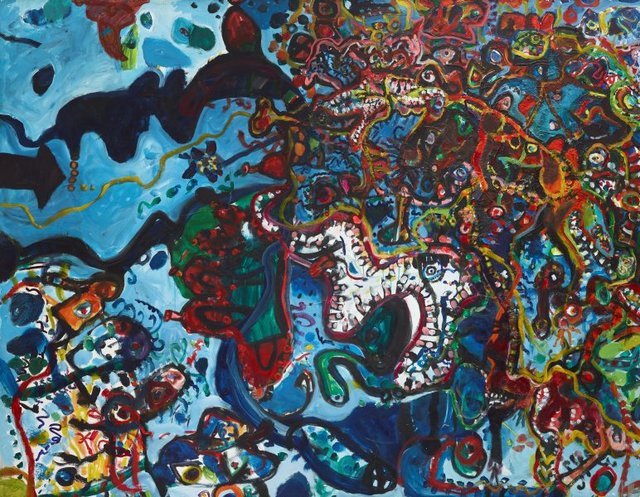 Entrance to the seaport of desire

By 1963, John Olsen was living in a fisherman's cottage at Watson's Bay, close to the entrance of Sydney Harbour. Responding to the rhythmic topography of Sydney's distinctive landforms, Olsen painted a number of works during 1963 and 1964 which are resplendent in their vivacious use of colour.

Inspired by the lavish sculptural architecture of the Spanish architect Antonio Gaudi, whose cathedral El Temple Expiatori de la Sagrada Família he had seen in Barcelona, Olsen's landscapes heave and swell through a textured web of line and shapes.

He later wrote in 1973:
"I've always thought of the formation of Sydney's land forms as a bitch goddess and frankly at times it frightens me. The breasty contours of its hills ... when your [sic] sailing through the heads you feel as though your [sic] sailing through her arms - And when you are coming into her you feel you are going deeper and you are caught in her spidery net."