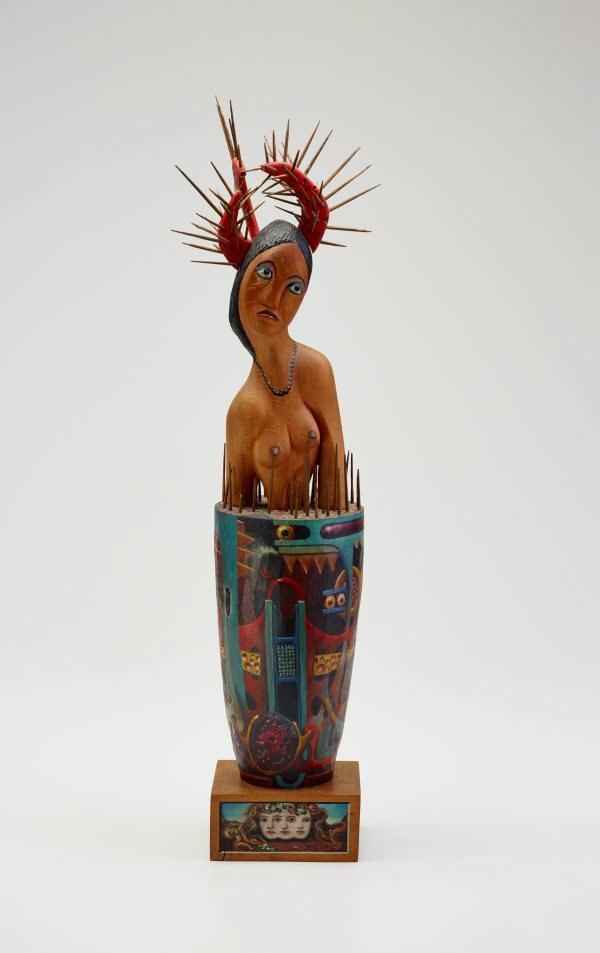 'Madame Sophie Sesostoris' was carved and assembled by Robert Klippel and painted by James Gleeson in the years 1947-48 when both artists were living and working in London. Her title derives from T.S. Eliot's poem 'The Waste Land' which features 'Madame Sosostris, famous clairvoyant'. The enigmatic predictions of her tarot cards are alluded to, for example, on the four miniature panels at the base of the sculpture. The figure carved by Klippel appeared to Gleeson just the way he imagined Madame Sosostris would look and also reminded him in a satirical way of the mysterious, melancholy women who gazed from the paintings of Dante Gabriel Rossetti and Edward Burne Jones. Gleeson titled the figure, distorted her name and cast her as a 'pre-raphaelite satire'.

Below the surface of her form we are shown the dazzling whirr of the organic machine. Both artists grappled with concepts of the internal and the external and their aim with this sculpture was 'to suggest the vital inner structure of an apparently simple form, to suggest that by some kind of x-ray magic one could look through the opaque skin and see all that lay within.'

This collaborative sculpture was included in the 1948 exhibition held by the two artists in London. Other works shown in this exhibition, include 'Entities suspended from a detector' and 'Fever chart' by Robert Klippel, both in the collection of the Art Gallery of New South Wales.